Lobbying for the "Public Good": A Case Study of a Nonprofit Sector Lobbying Effort in Alberta, Canada 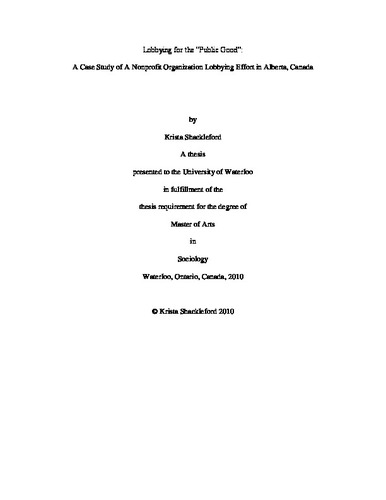 Political advocacy research has often relied on concepts from social movement literature to explain the success or failure of lobbying efforts. The following study builds on recent efforts to partner social movement concepts with neo-institutional theory in order to better understand political mobilization. Specifically, I aim to contribute to an understanding of how non-state actors, with little or no formal power, attempt to influence public policy. Seventeen in-depth interviews were conducted with participants of a nonprofit lobbying campaign that occurred in Alberta, Canada, in 2007. By examining the processes and the structural elements of the lobby’s activities, I assess the utility of combining these two theoretical literatures to enhance explanatory power. This study also emphasizes the multi-faceted nature of lobbying campaigns. Advocacy outcomes are influenced not only by challenger strategies and arguments, but by the responses and contexts of their challenges. Social movement concepts, such as frame analysis and resource mobilization, shed light on the lobbying processes undertaken by nonprofit advocacy participants. However, neo-institutional theory allows us to situate these processes within a larger political context, and understand how this context influences the decisions made by political decision makers. In addition to arguing these theoretical claims, I discuss the opportunities and limitations that facilitate and constrain collaborative processes between the Government of Alberta and the province’s nonprofit sector.