City Life, Anxiety and the Problem of the Neighbour: A Theoretical Exploration of the Grey Zone 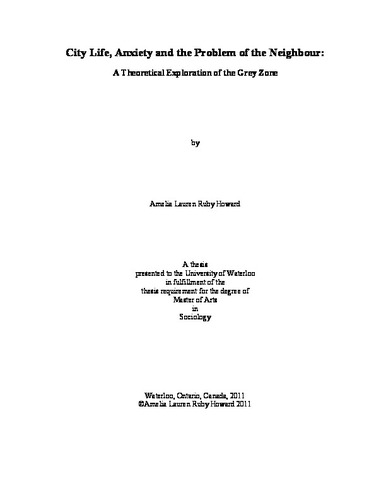 This thesis is a theoretical exploration of the problem of the neighbour as an encounter with the Grey Zone. I look at various materials that can be formulated as expressions of the anxiety over the unknown that can come out in confrontation with problematic neighbours. Using an interpretive lense that recognizes the fundamental ambiguity in any speech (Blum 2010, Bonner 1997, 1998) I attempt to show how such talk is grounded in the problem of anxiety in the face of the unknown. I begin with an analysis of city life and problem neighbours in general, I then move to a theoretical discussion of the problem that Žižek’s formulation of the Neighbour as Other and Raffel’s discussion of a shared world brings out. I then look at the problem of a specific kind of bad neighbour, a methadone clinic can have in terms of the experience of parenting, and how this is articulated in some theoretical writings on city life. I then turn to an analysis of the proverbial fence as a solution to the Neighbour, followed by an analysis of the Russell Williams case as a call to revisit the problem of the Neighbour in relation to the Grey Zone. Though seemingly disconnected, all the cases I deal with can be understood as part of a conversation on the relation of health, neighbourliness and anxiety in the city to the problem of an encounter with the unknown.

Amelia Lauren Ruby Howard (2011). City Life, Anxiety and the Problem of the Neighbour: A Theoretical Exploration of the Grey Zone. UWSpace. http://hdl.handle.net/10012/5767