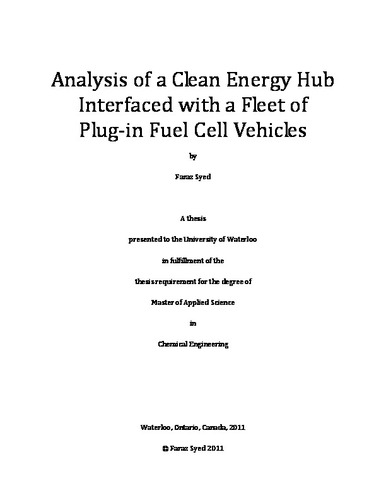 The ‘hydrogen economy’ represents an energy system in which hydrogen and electricity are the dominant energy carriers for use in transportation applications. The ‘hydrogen economy’ minimizes the use of fossil fuels in order to lower the environmental impact of energy use associated with urban air pollution and climate change. An integrated energy system is required to deal with diverse and distributed energy generation technologies such a wind and solar which require energy storage to level energy availability and demand. A distributed ‘energy hub’ is considered a viable concept in envisioning the structure of an integrated energy system. An energy hub is a system which consists of energy input/output, conversion and storage technologies for multiple energy carriers, and would provide an interface between energy producers, consumers, and the transportation infrastructure. Considered in a decentralized network, these hubs would form the nodes of an integrated energy system or network. In this work, a model of a clean energy hub comprising of wind turbines, electrolyzers, hydrogen storage, a commercial building, and a fleet of plug-in fuel cell vehicles (PFCVs) was developed in MATLAB, with electricity and hydrogen used as the energy carriers. This model represents a hypothetical commercial facility which is powered by a renewable energy source and utilizes a zero-emissions fleet of light duty vehicles. The models developed herein capture the energy and cost interactions between the various energy components, and also calculate the CO2 emissions avoided through the implementation of hydrogen economy principles. Wherever possible, similar models were used to inform the development of the clean energy hub model. The purpose of the modelling was to investigate the interactions between a single energy hub and novel components such as a plug-in fuel cell vehicle fleet (PFCV). The final model reports four key results: price of hub electricity, price of hub hydrogen, total annual costs and CO2 emissions avoided. Three scenarios were analysed: minimizing price of hub electricity, minimizing total annual costs, and maximizing the CO2 emissions avoided. Since the clean energy hub could feasibly represent both a facility located within an urban area as well as a remote facility, two separate analyses were also conducted: an on-grid analysis (if the energy hub is close to transmission lines), and an off-grid analysis (representing the remote scenarios). The connection of the energy hub to the broader electricity grid was the most significant factor affecting the results collected. Grid electricity was found to be generally cheaper than electricity produced by wind turbines, and scenarios for minimizing costs heavily favoured the use grid electricity. However, wind turbines were found to avoid CO2 emissions over the use of grid electricity, and scenarios for maximizing emissions avoided heavily favoured wind turbine electricity. In one case, removing the grid connection resulted in the price of electricity from the energy hub increasing from $82/MWh to $300/MWh. The mean travel distance of the fleet was another important factor affecting the cost modelling of the energy hub. The hub’s performance was simulated over a range of mean travel distances (20km to 100km), and the results varied greatly within the range. This is because the mean travel distance directly affects the quantities of electricity and hydrogen consumed by the fleet, a large consumer of energy within the hub. Other factors, such as the output of the wind turbines, or the consumption of the commercial building, are largely fixed. A key sensitivity was discovered within this range; the results were ‘better’ (lower costs and higher emissions avoided) when the mean travel distance exceeded the electric travel range of the fleet. This effect was more noticeable in the on-grid analysis. This sensitivity is due to the underutilization of the hydrogen systems within the hub at lower mean travel distances. It was found that the greater the mean travel distance, the greater the utilization of the electrolyzers and storage tanks lowering the associated per km capital cost of these components. At lower mean travel distances the utilization of the electrolyzers ranged from 25% to 30%, whereas at higher mean travel distances it ranged from 97% to 99%. At higher utilization factors the price of hydrogen is reduced, since the cost recovery is spread over a larger quantity of hydrogen.