Development of HPLC-FID Coupling Using Water as the Eluent 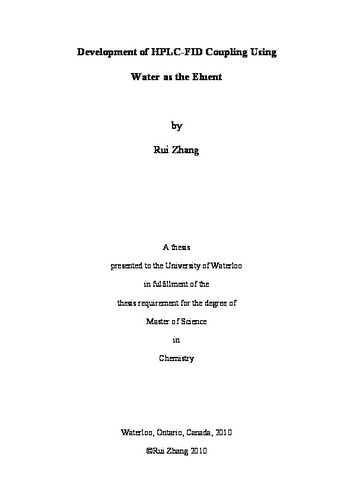 The characterization of all components of pharmaceutical preparations, especially in the analysis of impurities present at levels higher than 0.05% of the main component, is a challenge in the pharmaceutical industry because no single detector can detect all impurities present. All commercial detection methods suffer from certain disadvantages. Universal sensitive detection with a wide dynamic range is strongly demanded. This results in an increasing interest in the development of universal sensitive detection methods for the pharmaceutical industry, which was the goal of this project. In this project, universal detection of analytes by HPLC-FID coupling was explored. Due to the large volume of the vapours of the mobile phase in HPLC, flame-based detection systems are prone to flame instability. To overcome this problem, a series of improvements were evaluated: 1) a fraction of the total volume of the effluent was delivered to the flame of the FID in a split mode; 2) a tubular oven was used before the FID to preheat the effluent and remove a large fraction of the mobile phase before the detector; 3) oxygen gas and a modified FID with an elongated burner were used to improve the performance of the FID. Finally, optimization of the FID design and parameters was performed by running a series of tests in flow injection mode using simplex optimization method.