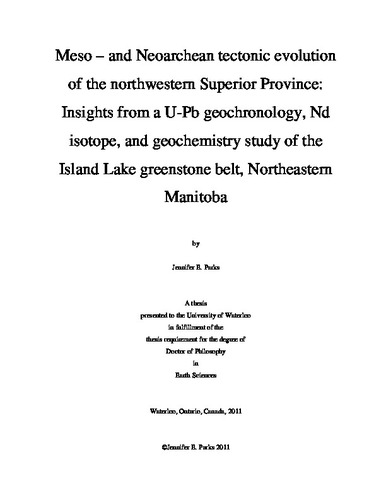 What tectonic processes were operating in the Archean, and whether they were similar to the “modern-style” plate tectonics seen operating today, is a fundamental question about Archean geology. The Superior Province is the largest piece of preserved Archean crust on Earth. As such it provides an excellent opportunity to study Archean tectonic processes. Much work has been completed in the southern part of the Superior Province. A well-documented series of discrete, southward younging orogenies related to a series of northward dipping subduction zones, has been proposed for amalgamating this part of the Superior Province. The tectonic evolution in the northwestern Superior Province is much less constrained, and it is unclear if it is related to the series of subduction zones in the southern part of the Superior Province, or if it is related to an entirely different process. Such ideas need to be tested in order to develop a concise model for the Meso – and Neoarchean tectonic evolution of the northwestern Superior Province. To this end, a field mapping, U-Pb geochronology, Nd isotope, and lithogeochemistry study was undertaken in the Island Lake greenstone belt. This granite-greenstone belt is part of the northern margin of the North Caribou terrane, a larger reworked Mesoarchean crustal block located in the northwestern Superior Province. U-Pb TIMS zircon geochronology data shows that the Island Lake greenstone belt experienced a long and complex geological history that included the deposition of three distinct volcanic assemblages at ca. 2897 Ma, 2852 Ma, and 2744 Ma, as well as a younger clastic sedimentary group, the Island Lake group. All of these volcanic assemblages include felsic and mafic volcanic rocks, as well as a suite of contemporaneous plutonic rocks. The U-Pb data set shows that the Savage Island shear zone, a regional fault structure that transects the Island Lake greenstone belt, is not a terrane-bounding feature as correlative supracrustal assemblages are observed on both sides of it. The Nd isotope data shows that the volcanic assemblages and contemporaneous plutons have been variably contaminated by an older ca. 3.0 Ga crustal source. The mafic volcanic rocks in the assemblages have two distinct geochemical signatures, and show a pattern of decreasing crustal contamination with decreasing age. Together these data suggests that the Meso – and Neoarchean volcanic assemblages are part of an intact primary volcanic stratigraphy that were built on the same ca. 3.0 Ga basement and have autochthonous relationships with each other. This basement is the North Caribou terrane. The youngest sedimentary group in the belt, the Island Lake group, was deposited between 2712 Ma and 2699 Ma. It consists of “Timiskaming-type” sedimentary rocks, and is the youngest clastic sedimentary package in the belt. A detailed study of detrital zircons in units from the stratigraphic bottom to the top of the sedimentary group indicates an age pattern of detrital zircons that is most consistent with a scenario in which sediments were deposited in inter-diapiric basins created by diapirism and sagduction (i.e., vertical tectonic) processes. During the diapiric ascent of the felsic material, inter-diapiric basins were formed in the synclines between adjacent domes, into which sediments were deposited. U-Pb zircon TIMS geochronology identified two ages of deformation in the Island Lake greenstone belt. Two dykes that crosscut an older, D1 foliation place a minimum age of ca. 2723 Ma on the D1 deformation, and two syn-kinematic dykes date movement along two transpressional shear zones to 2700 Ma. Together all these data indicate that the tectonic evolution in the Island Lake greenstone belt and in the northwestern Superior Province took place in three main stages. The first two stages involved the generation of Meso – and Neoarchean volcanic assemblages and contemporaneous plutonic rocks due to southward dipping subduction under the North Caribou micro-continent. The third stage involved the deposition of late “Timiskaming-type” sediments during vertical tectonic processes in conjunction with horizontal tectonic movement along late transpressional shear zones at ca. 2.70 Ga. At the end of this process the North Superior superterrane was terminally docked to the North Caribou terrane along the North Kenyon fault. This study shows that while a version of horizontal or “modern” style plate tectonics were operating in the Archean, vertical tectonic processes were also occurring and that these processes operated synchronously in the Neoarchean.