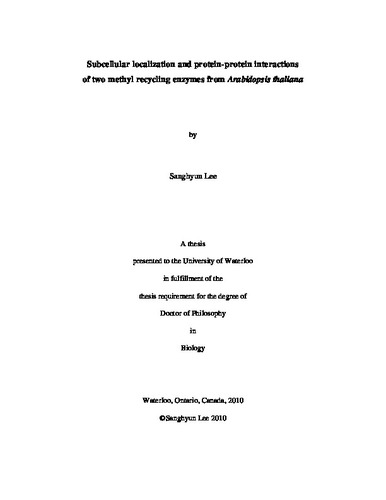 This thesis documents the subcellular localization and protein-protein interactions of two methyl recycling enzymes. These two enzymes, adenosine kinase (ADK) and S-adenosyl-L-homocysteine hydrolase (SAHH), are essential to sustain the hundreds of S-adenosyl-L-methionine (SAM)-dependent transmethylation reactions in plants. Both ADK and SAHH are involved in the removal of a competitive inhibitor of methyltransferases (MTs), S-adenosyl-L-homocysteine (SAH), that is generated as a by-product of the each transfer of a methyl group from SAM to a substrate. This research focused on understanding how SAH is metabolized in distinct cellular compartments to maintain MT activities required for plant growth and development. Localization studies using green fluorescent protein (GFP) fusions revealed that both ADK and SAHH localize to the cytoplasm and the nucleus, and possibly to the chloroplast, despite the fact that the primary amino acid sequence of neither protein contains detectable targeting signals. This suggested the possibility that these methyl-recycling enzymes may be targeted by specific protein-protein interactions. Moreover, deletion analysis of SAHH1 indicated that the insertion region (IR) of 41 amino acids (Gly150-Lys190), which is present only in plants and parasitic protozoan SAHHs among eukaryotes, is essential for nuclear targeting. This result suggested that the surface-exposed IR loop may serve as a binding domain for interactions with other proteins that may direct SAHH to the nucleus. To investigate protein-protein interactions, several methods were performed including co-immunoprecipitation, bimolecular fluorescence complementation, and pull-down assays. These results not only revealed that ADK and SAHH possibly interact through the IR loop of SAHH in planta, but also suggested that this interaction is either dynamic or indirect, requiring a cofactor/another protein(s) or post-translational modifications. Moreover, possible interactions of both ADK and SAHH with a putative Arabidopsis mRNA cap methyltransferase (CMT), which is localized predominantly in the nucleus, were also confirmed. These results support the hypothesis that the nuclear targeting of both SAHH and ADK can be mediated by the interaction with CMT. In addition, purification of Strep-tagged SAHH1 expressed in Arabidopsis identified a novel interaction between SAHH and aspartate-semialdehyde dehydrogenase (ASDH), an enzyme that catalyzes the second step of the aspartate-derived amino acid biosynthesis pathway. Analysis of ASDH-GFP fusions revealed that ASDH localizes to the chloroplast and the stromule-like structure that emanates from chloroplasts. Moreover the mutation in three amino acids (Pro164-Asp165-Pro166) located within the IR loop of SAHH disrupted its binding to ASDH which affected the plastid localization of SAHH, suggesting that the interaction between SAHH and ASDH is required for plastid-targeting of SAHH. Taken together, this thesis demonstrated that the localization of ADK and SAHH in or between compartments is possibly mediated by specific protein interactions, and that the surface-exposed IR loop of SAHH is crucial for these interactions.