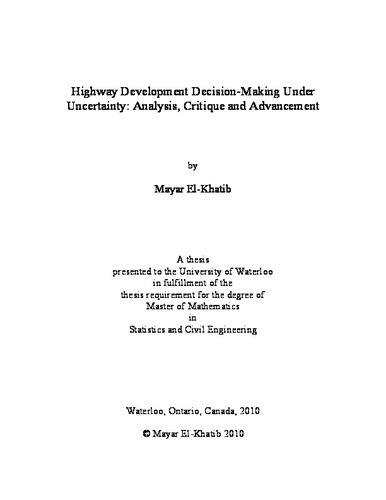 While decision-making under uncertainty is a major universal problem, its implications in the field of transportation systems are especially enormous; where the benefits of right decisions are tremendous, the consequences of wrong ones are potentially disastrous. In the realm of highway systems, decisions related to the highway configuration (number of lanes, right of way, etc.) need to incorporate both the traffic demand and land price uncertainties. In the literature, these uncertainties have generally been modeled using the Geometric Brownian Motion (GBM) process, which has been used extensively in modeling many other real life phenomena. But few scholars, including those who used the GBM in highway configuration decisions, have offered any rigorous justification for the use of this model. This thesis attempts to offer a detailed analysis of various aspects of transportation systems in relation to decision-making. It reveals some general insights as well as a new concept that extends the notion of opportunity cost to situations where wrong decisions could be made. Claiming deficiency of the GBM model, it also introduces a new formulation that utilizes a large and flexible parametric family of jump models (i.e., Lévy processes). To validate this claim, data related to traffic demand and land prices were collected and analyzed to reveal that their distributions, heavy-tailed and asymmetric, do not match well with the GBM model. As a remedy, this research used the Merton, Kou, and negative inverse Gaussian Lévy processes as possible alternatives. Though the results show indifference in relation to final decisions among the models, mathematically, they improve the precision of uncertainty models and the decision-making process. This furthers the quest for optimality in highway projects and beyond.