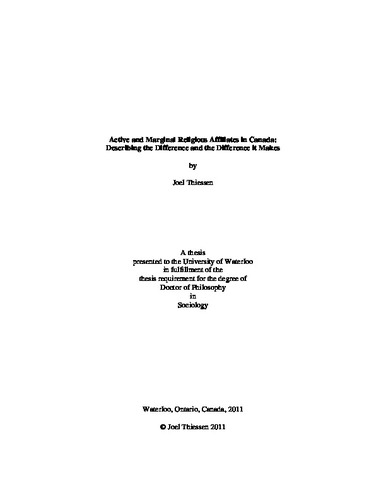 In 2002, Reginald Bibby surprisingly asserted that a renaissance of religion is, or soon will be taking place in Canada. However, the assertion clashes with the dominant belief based largely on Bibby’s accumulated data about Canadians’ religious beliefs and practices, that Canada is becoming an increasingly secularized society. Based on forty-two in-depth interviews, this dissertation tests the “renaissance thesis” and improves our grasp of how Canadians subjectively understand their religious involvements by comparing the views of active religious affiliates (those who identify with a religious group and attend religious services nearly every week) and marginal religious affiliates (those who identify with a religious group and attend religious services primarily on Christmas or Easter, or for rites of passage such as weddings and funerals). What explains their higher and lower levels of religious involvement, what is the likelihood that marginal affiliates could eventually become active affiliates, and how does this understanding help us to assess the degree of religiosity or secularity in Canada? I argue that active and marginal affiliates are distinct mainly because of their different experiences with the supernatural or their local congregation, and the social influences that either encourage or discourage involvement in a religious group. These conclusions emerge from a close examination and testing of fundamental principles in Rational Choice Theory, a theory currently popular in the sociology of religion and in Bibby’s ongoing analysis of religion in Canada. Contrary to Bibby’s prediction, there is little reason to believe that marginal affiliates will eventually become active affiliates, regardless of changes to the supply of religion in Canada. In general, marginal affiliates appear content with their current levels of religiosity. As a result, I think it is likely that we will witness continued secularization at the individual level in Canada, which if proven correct, could strain Canada’s civic fabric in the future.

Joel Thiessen (2011). Active and Marginal Religious Affiliates in Canada: Describing the Difference and the Difference it Makes. UWSpace. http://hdl.handle.net/10012/5737