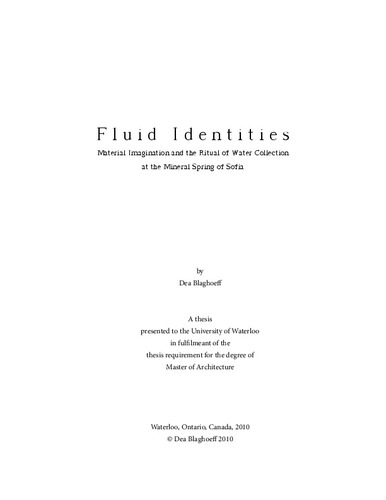 How do we build for a specific place and culture in the age of globalization, where the notion of culture has become fluid and drawn from a multiplicity of locations? This thesis argues that rather than relying on ideologies of symbols, an authentic regional architecture must derive its meaning through the experience of localized rituals that take place over time, and thus give constancy to place. The notion of cultural identity in this thesis is explored through the story of the Baths and the Mineral Spring in Sofia, Bulgaria. This story takes us from the origins of the city, through its cultural mutations and transformations and finally to the questions posed by the decommissioned Baths. The thesis design proposal outlines an alternate architectural strategy to the current proposal: converting the Bath House into a prestigious spa center and ‘Museum of Sofia’. The alternate design in contrast, addresses the importance of place specific ritual and the still enduring practice of spring water collection - which has now been dislocated from the main Baths square. The question of authenticity in the design for the Baths Square is connected to the changing notion of cultural identity. The origins of which are rooted in our response to a particular environment; a rapport which has framed our social ideologies, cultural practices, and their formal manifestations. However, within the regimes of globalization cultural identity has become uprooted from ‘place’ and has come into crisis. In response to this crisis of identification, there is a frantic desire to reaffirm the local and re-envision a collective identity. This thesis proposes an architecture of the material imagination - which recognizes the multiplicity of our cultural reality today. It creates spaces that are not designed primarily on the visual level of the symbol but rather spaces which are to be experienced sensorially and habitually; only then becoming part of the collective experience and identity of the culture. These spaces reduce the specificity of the symbol as a depiction of ‘one’ identity, and rather derive cultural meaning from the experience of a unique and hierophantic place, and its living practice.

Dea Blaghoeff (2011). Fluid Identities Material Imagination and the Ritual of Water Collection at the Mineral Spring of Sofia. UWSpace. http://hdl.handle.net/10012/5726