Tennis spectator loyalty when life gets in the way 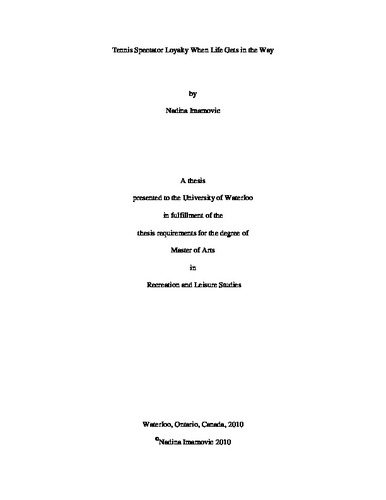 ABSTRACT The purpose of this study was to understand constraints to tennis spectating and constraints negotiation therein. The primary research questions were related to the changing nature of spectating experience, its’ meaning, and spectators’ actions when faced with constraints. The topic of spectating sporting events, consumer loyalty, and leisure constraints have widely been addressed in the literature using quantitative methods. This research attempted to add understanding to the body of literature qualitatively. Data was collected and analyzed using the grounded theory method. This research also attempted to address the recommendation to examine negotiation-efficacy role among various populations and other leisure contexts (Loucks-Atkinson & Mannell, 2007). In depth interviews were conducted with thirteen tennis spectators (six males and seven females) residing in Kitchener-Waterloo, Guelph, Hamilton, Oshawa, and Toronto, Ontario. Spectators varied in age, playing ability, and occupation. Spectating experiences suggested ten constraints, six negotiation strategies, and five steps to minimize the impact of potential future constraints on one’s behaviour. Ten constraints experienced were: 1) too costly to attend a tennis event, 2) uncomfortable and deterrent weather prior and during the event, 3) lack of resources and accessibility to them, 4) time conflict between the event and everyday life, 5) long and time consuming distance to be travelled, 6) poor players’ performance, 7) others’ perception of the sport, 8) sitting too close or too far from the action, 9) tennis not being among top spectators sports in Canada, and 10) difficulty finding a parking spot. The analysis revealed that the perception of these constraints differed based on age, gender, and previous playing experience. Negotiation strategies widely used were: 1) scheduling ahead, 2) using electronic resources for viewing, 3) networking and talking to others, 4) playing tennis, 5) going to a different sporting event, and 6) engaging in interactive activities. Five steps in minimizing the effect of potential future constraints consisted of: 1) being organized, 2) travelling with a friend, 3) gaining knowledge, 4) controlling one’s expectations, and 5) staying committed to the sport. The majority felt in control when negotiating. The constructivist grounded theory revealed that the relationship between constraints, negotiation, and participation in tennis spectating was circular. This relationship implied that although negotiation takes place, it does not eliminate constraints all together, but rather potentially reducing the impact of a constraint. The same constraint may reoccur again in the future and it was understood that as long as tennis spectators are active constraints will exist and negotiation strategies will occur. Constraints in this study were related with negative emotions, reduced enjoyment, physical discomfort which threatened on future tennis spectating behaviour. The main limitation of this study is that the results are not representative of the population and are participant and context specific. Implications for practice may include: establishing a sense of service value, increasing of interactive gaming and activities during inclement weather, betterment of promotional efforts of amateur events and media exposure via local channels of professional tennis events. Future research recommendations include studying a similar topic in a different context, assessing the impact of sport attachment versus player attachment on spectating behaviour of individual sports quantitatively, and conducting an experiment where one of the constraints is manipulated.