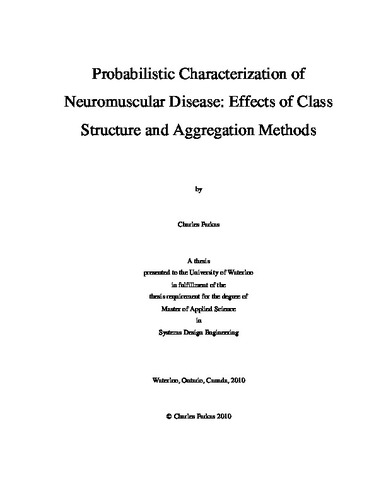 Neuromuscular disorders change the underlying structure and function of motor units within a muscle, and are detected using needle electromyography. Currently, inferences about the presence or absence of disease are made subjectively and are largely impression-based. Quantitative electromyography (QEMG) attempts to improve upon the status quo by providing greater levels of precision, objectivity and reproducibility through numeric analysis, however, their results must be transparently presented and explained to be clinically viable. The probabilistic muscle characterization (PMC) model is ideally suited for a clinical decision support system (CDSS) and has many analogues to the subjective analysis currently used. To improve disease characterization performance globally, a hierarchical classification strategy is developed that accounts for the wide range of MUP feature values present at different levels of involvement (LOI) of a disorder. To improve utility, methods for detecting LOI are considered that balance the accuracy in reporting LOI with its clinical utility. Finally, several aggregation methods that represent commonly used human decision-making strategies are considered and evaluated for their suitability in a CDSS. Four aggregation measures (Average, Bayes, Adjusted Bayes, and WMLO) are evaluated, that offer a compromise between two common decision making paradigms: conservativeness (average) and extremeness (Bayes). Standard classification methods have high specificity at a cost of poor sensitivity at low levels of disease involvement, but tend to improve with disease progression. The hierarchical model is able to provide a better balance between low-LOI sensitivity and specificity by providing the classifier with more concise definitions of abnormality due to LOI. Furthermore, a method for detecting two discrete levels of disease involvement (low and high) is accomplished with reasonable accuracy. The average aggregation method offers a conservative decision that is preferred when the quality of the evidence is poor or not known, while the more extreme aggregators such as Bayes rule perform optimally when the evidence is accurate, but underperform otherwise due to outlier values that are incorrect. The methods developed offer several improvements to PMC, by providing a better balance between sensitivity and specificity, through the definition of a clinically useful and accurate measure of LOI, and by understanding conditions for which each of the aggregation measures is better suited. These developments will enhance the quality of decision support offered by QEMG techniques, thus improving the diagnosis, treatment and management of neuromuscular disorders.