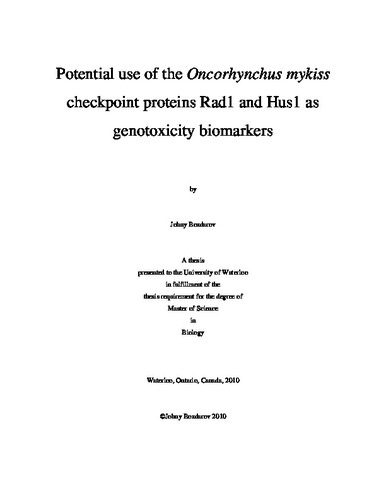 Cell-cycle checkpoint proteins help maintain genomic integrity by sensing damaged DNA and initiating DNA repair or apoptosis. Checkpoint protein activation to cell-cycle damaging agents can involve post-translational modifications and these alterations provide a means to determine whether DNA in a cell is damaged or not. Steinmoeller et al. (2009) showed that checkpoint proteins are suitable biomarkers for detecting genotoxins in Oncorhynchus mykiss (rainbow trout). In this project, two evolutionarily conserved checkpoint proteins, Rad1 and Hus1, have been cloned from rainbow trout and antibodies against these proteins were developed. This is the first time that either Rad1 or Hus1 has been characterized in rainbow trout. For rtRad1, it was determined that the open-reading frame was 840bp, which encodes 279aa with a predicted protein size of 31kDa. The rtRad1 amino-acid sequence is highly conserved and contains conserved exonuclease and leucine zipper domains. RT-PCR was used to identify alternatively spliced variants of rtRad1 and it appears that these variants encode different sized Rad1 proteins that are tissue and cell-line specific. A Rad1 splice variant that encodes an 18kDa protein appears to be abundant only in heart tissue and in the RTgill-W1 and RTbrain-W1 cell-lines. A genotoxicity study was completed where RTgill-W1 and RTbrain-W1 cells were treated with bleomycin, which induces double-stranded DNA breaks. In RTgill-W1, levels of an 18kDa Rad1 protein increased in a dose-dependent manner while in RTbrain-W1 the Rad1 levels remained the same. It appears that this 18kDa Rad1 protein may be directly involved in maintaining genomic integrity and shows potential to be used as a genotoxicity biomarker. This is the first time that an isoform of Rad1 has shown to be modified in the presence of a damaging agent. Both Rad1 and Hus1 need to be further characterized to determine their usefulness as genotoxicity biomarkers.