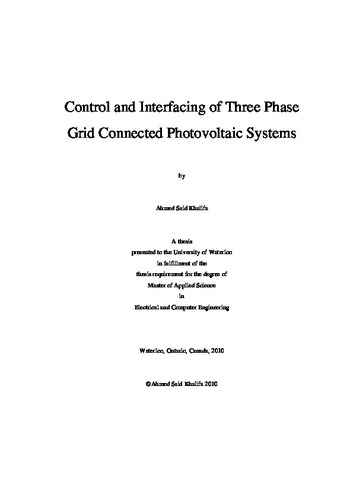 Solar power is considered a very promising source for electric power generation. The abundance of sunlight over a large area of the earth surface gives rise to several applications of photovoltaic systems. Electricity can be generated from sunlight either directly by employing the photovoltaic effect, or by using energy from the sun to heat up a working fluid that can be used to power up electricity generators. These two technologies are widely used today to provide power to either stand-alone loads or for connection to the power system grid. Maximum power point tracking (MPPT) is a very important consideration that is taken into account when building a new photovoltaic power system. This is needed in order to extract maximum power output from a PV array under varying atmospheric conditions to maximize the return on initial investments. Several techniques have been used to tackle this problem including perturb and observe (P&O), incremental conductance (IncCond) and fuzzy logic based algorithms. Judging between these techniques is based on their speed of locating the maximum power point (MPP) of a PV array under given atmospheric conditions, besides the cost and complexity of implementing them. The P&O and IncCond algorithms have a low implementation complexity but their tracking speed is slow. Fuzzy logic techniques are faster but suffer from high implementation complexity. One of the goals of this thesis is to present an MPPT algorithm implementation that is based on the fractional open circuit voltage method. This technique is easy to implement and offers a fast tracking speed for the MPP of a PV array. It provides an approximation within 4-5% of the maximum power point, which is a tradeoff between the speed and accuracy of operation around the MPP. It offers a speed advantage in grid connected PV systems. The P&O algorithm, which is very common, is difficult to implement under these conditions due to its poor response time. There is also a need for developing control techniques for three phase grid connected PV systems including a method for DC link voltage control that can stabilize the voltage at the inverter input. This area of research is currently growing with the increase in number of PV installations backed up by government incentives in several countries. In addition to the previously mentioned points, this work is intended to be used in further research to replace the representation of PV arrays as a simple DC source when included in power system studies. That is a basic assumption and does not take into consideration the various dynamics caused by changing solar irradiation and surface temperature of the array.