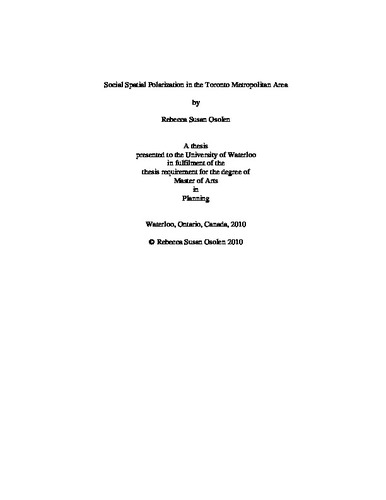 This thesis presents evidence that income polarization is accompanied by increasing social-spatial disparities between areas of the city that were developed in different societal contexts, with different planning approaches, and that have different land use and transportation dynamics. An analysis of the social structure of the Toronto Metropolitan Area finds indications of widespread gentrification in the inner city, socioeconomic decline in the postwar suburbs, and sustained household affluence in the ever expanding outermost suburbs of the metropolitan area. It is argued that, as a political and social endeavor that is embedded in broader development regimes, urban planning influences social-spatial polarization to the extent that it influences urban form.