Restoring Order Through Helping Others: Compensatory Control and Prosocial Intentions 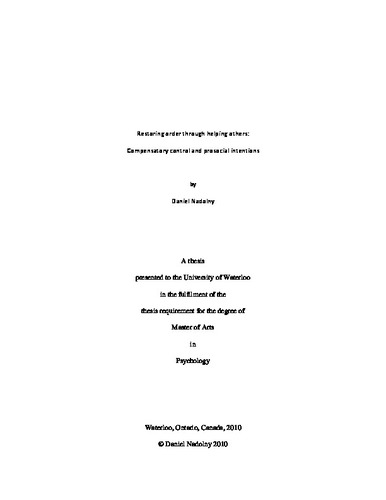 Acting altruistically is one of humanity’s most praised, yet most puzzling behaviours. The aim of the present research is to examine the possibility that increased prosocial intentions can result from attempts to compensate for threats to perceptions of order. Previous research has found that people compensate order threats by increasing perceptions of control in external sources (Kay et al, 2008). Several competing theories on the origins of prosocial behaviour exist, such as the debate between Daniel Batson, advocating altruism, and Robert Cialdini, advocating an egoistic explanation. However, thus far no research has been published concerning the possibility of prosocial intentions acting as a compensatory mechanism to restore a sense of order in the world. In Study 1 perceptions of order were manipulated through writing about a time when participants did or did not have control over a positive outcome, followed by measurements of intentions to donate blood at an upcoming blood drive. In Study 2 participants read of a fake Harvard conference suggesting that the world was random. Participants then had an opportunity to restore control or did not have this opportunity, followed by a measurement of intentions to help solve problems in the world. Results of these studies support the hypothesis that intentions to act prosocially increase following threats to perceptions of order and control. Implications of these findings are discussed.