June Must be Right and 9 is on Top: An Investigation of Time-space and Number-form Synaesthesia 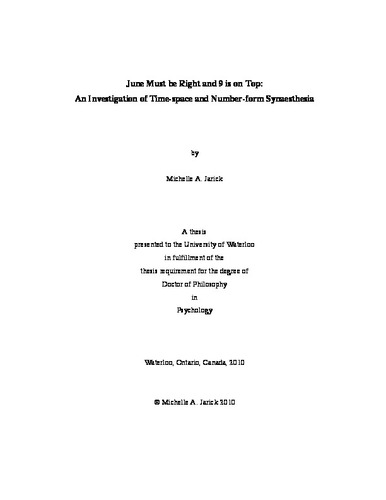 Synaesthesia is a fascinating condition whereby individuals report extraordinary experiences when presented with ordinary stimuli. In this thesis, we examine an individual (L) who experiences time units (i.e., months and hours) and numbers as occupying specific spatial locations (e.g., January is 30º to the left). This type of spatial-form synaesthesia has been recently investigated by Smilek et al. (2007), demonstrating that synaesthetic time-space associations are highly consistent, occur regardless of intention, and can direct spatial attention. We extended this work in Chapter 2 by showing that for L, her time-space vantage point changed depending on whether the time units were seen or heard. For example, when L saw the word JANUARY, she reported experiencing January on her left side, however when she heard the word "January" she experienced the month on her right side. In this thesis, we validated L’s subjective reports using a spatial cueing task. The names of months were centrally presented followed by targets on the left or right. L was faster at detecting targets in validly cued locations relative to invalidly cued locations both for visually presented cues (January orients attention to the left) and for aurally presented cues (January orients attention to the right). We replicated these vantage-point dependent cueing effects also using hours of day. In Chapter 3, we further explored whether synaesthetic number forms could bias spatial attention using a spatial cueing and SNARC-type task. Two synaesthetes (L and B) both described experiencing the numbers 1 through 10 running vertically from bottom to top. Both experiments confirmed their synaesthetic number forms, such that when making odd-even judgments for the numbers 1, 2, 8, and 9, they showed SNARC-compatibility effects for up-down movements (aligned with their number form), but not left-right (misaligned) movements. Likewise in the spatial cueing task, both synaesthetes showed significantly faster response times to detect targets on the bottom of the display if preceded by a low number (1,2) and the top of the display if preceded by a high number (8,9), whereas they showed no cueing effects when targets appeared on the left or right (misaligned with their number forms). Both synaesthetes were, however, reliably faster to detect left targets following the presentation of numbers 10, and 11, and right targets following numbers 19 and 20 (running from left to right). Hence, we demonstrated that cueing and SNARC tasks could be used to empirically verify synaesthetic number forms. Moreover, we showed that numbers could direct spatial attention to idiosyncratic locations similar to time-units, replicating and extending our findings from Chapter 2. Lastly, Chapter 4 was aimed to explore the automaticity and involuntary nature of L’s number-forms. We continued to use the spatial cueing task and sought to eliminate any influence of strategy on L’s performance by: (1) shortening the interval between the cue and target onset to only 150 ms and (2) having the targets only fall in synaesthetically cued locations on 14.2% of trials. As a result, these manipulations should eliminate any cuing effects if L’s performance was attributable to intentionally using the cue to predict target location. However, our findings still showed an attentional bias consistent with L’s synaesthesia. We attributed L’s resilient cueing effects to the automaticity of her number-forms, thus demonstrating one of the hallmark attributes of synaesthesia. Overall, this series of studies convincingly demonstrated the reality of time-space and number-form synaesthesia and Chapter 5 concludes by discussing how this work has significantly contributed to the synaesthesia literature and to the study of perception overall.