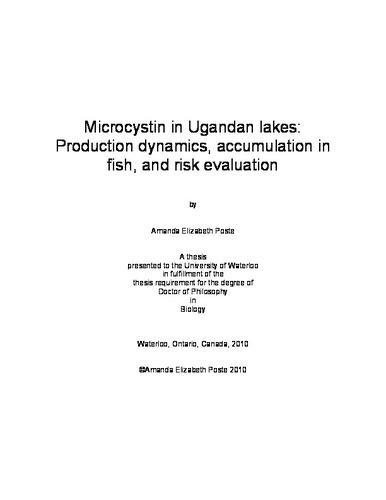 Eutrophication of freshwater lakes has led to an increase in the occurrence of harmful cyanobacterial blooms, and it is expected that a warming climate will further exacerbate the frequency and duration of such blooms. Microcystin is a cyanobacterial hepatotoxin that is found worldwide, and poses a serious threat to the ecological communities in which it is found as well as to those who use these waters for drinking, recreation, or as a food source. Although microcystin is known to accumulate in fish and other aquatic biota, the prevalence of microcystin in fish tissue and the human health risks posed by microcystin exposure through fish consumption remain poorly resolved. Very few studies have quantified microcystin (a broadly present cyanotoxin) in water from East African lakes, despite the large human and animal populations that rely on these lakes for both water and food, and to date there is very little information available on the accumulation of microcystin in fish from these lakes. A comprehensive set of water and fish samples was collected on a monthly basis between September 2008 and February 2009 from several lakes in Uganda. The study sites included two embayments in northern Lake Victoria (Murchison Bay and Napoleon Gulf), Lake Edward, Lake George, Lake Mburo, and the crater lakes Saka and Nkuruba. The large lakes sampled all support substantial commercially important fisheries, while the smaller lakes support subsistence fisheries that provide a critically important source of protein and income for riparian communities. Microcystin concentrations in water were determined in addition to chlorophyll and nutrient concentrations, phytoplankton community composition, mixing dynamics and light conditions. At all study sites except Lake Nkuruba, microcystin concentrations in water regularly exceeded the WHO guideline for microcystin in drinking water of 1.0 µg/L. Microcystis spp. emerged as the cyanobacterial taxa that is primarily responsible for microcystin production in these lakes, and as such, microcystin concentrations were closely linked to environmental factors that favour the development of high Microcystis biomass, including high nutrient concentrations, as well as shallow mixing depth which acts to increase mean mixed layer light intensity. Because of the importance of understanding the underlying food web when considering the accumulation and trophic transfer of a compound, stable carbon and nitrogen isotope analysis was used to characterize the food webs at the previously mentioned Ugandan study sites as well as in the East African great lake Albert. Omnivory was found to be common at all study sites, and based on δ13C values, the food webs in these lakes were strongly based on pelagic primary production, with no strong evidence of substantial benthic contribution to these food webs, likely as a result of reduced benthic primary productivity in these generally low-transparency eutrophic lakes. The distribution and trophic transfer of mercury was also characterized in the Ugandan study lakes (including Lake Albert) in order to provide a contrast for the trophic transfer of microcystin in the same lakes. Furthermore, relatively little is known about the behaviour of mercury in tropical hypereutrophic lakes, and the study sites included in the current study provided an opportunity for the exploration of this topic. Consistent biomagnification of mercury was observed at all study sites; however, mercury concentrations in fish were generally low, and would not be expected to pose a risk to consumers. Mercury dynamics were strongly linked to lake trophic status, with biomagnification rates significantly lower at the hypereutrophic study sites than at the mesotrophic and eutrophic study sites. I found evidence that growth and possibly biomass dilution can reduce mercury concentrations at the base of the food web, while growth dilution of mercury at consumer trophic levels might effectively reduce the biomagnification rate of mercury in these hypereutrophic lakes. Microcystin was prevalent in fish muscle tissue from all study sites and at all trophic levels. In contrast to mercury, for which consistent biomagnification was observed, neither biomagnification nor biodilution was observed for microcystin; and concentrations were relatively consistent throughout the fish food web, including in top predators, indicating that efficient trophic transfer of microcystin is occurring in these lakes. Microcystin concentrations in fish from several study sites followed seasonal trends that were similar to those observed for microcystin concentrations in water at these sites, suggesting that fish can rapidly respond to changes in microcystin concentrations in water through accumulation and depuration of this toxin. Microcystin concentrations in water and fish from all Ugandan study sites (including Lake Albert) in addition to data from two temperate eutrophic embayments (Maumee Bay in Lake Erie, and the Bay of Quinte in Lake Ontario) were compiled and used to estimate potential microcystin exposure to human consumers of both water and fish from these study sites. Microcystin was pervasive in water and fish from both the tropical and temperate study sites. Also, these results establish that fish consumption can be an important and even dominant source of microcystin to humans, and can cause consumers to exceed recommended total daily intake guidelines for microcystin. These results highlight the need to consider potential exposure to microcystin through fish consumption in addition to water consumption in order to adequately assess human exposure and risk.