Motivating change through vision: The influence of personal values, self interest, motivational orientation and affect on people’s responses to a visionary presentation about diversity 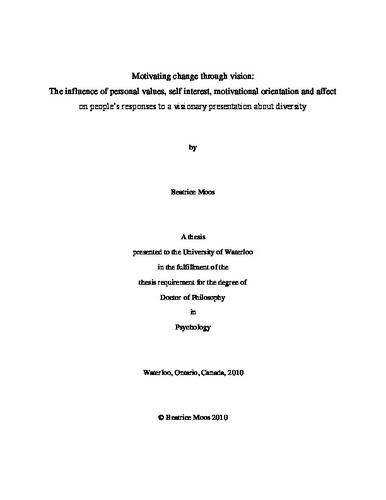 When the case for organizational change is presented as a “vision,” is action to support the change more likely? This notion was tested in two studies in the context of diversity issues at work. Diversity was selected as the context because Canadian workplaces are becoming increasingly diverse, and organizations are confronted with the challenge of addressing diversity issues appropriately and effectively. Moreover, theoretically critical features of visions, such as a connection with personal values, may be present in a vision of diversity. It was hypothesized that a vision—a picture of a desirable future state—may be more effective when it is aligned with individuals’ self interests and personal values. In Study 1, small groups of undergraduate male and female students (N=221) were presented with a vision of a proposed Employment Equity (EE) program that focused on raising women's employment rates. Self-interest was captured in the design as the interaction of participant gender with extent of employment change for women (small vs. large) resulting from the implementation of the EE program. Value orientation was captured by participants’ importance ranking of social justice on a pre-study measure. Verifying the self interest manipulation, men were seen to perceive that this program would influence their career advancement negatively and this effect was significantly stronger in the condition with the large increase in women’s employment. The most striking finding emerged with the three-way interaction between gender, social justice orientation, and the extent of employment change condition as these variables affected participants’ willingness to support the proposed EE program. Men who placed lower value on social justice showed a straightforward self-interest effect, with lowest support for the policy occurring when the increase in the women’s employment rate was greater. In contrast, men with higher social justice value were more favourable toward the policy that produced a greater change in women’s employment rates. For these men, personal values seemed to trump self-interests. Results involving positive affect mirrored the pattern of these results. Compared to a small employment increase for women, a large mandated increase in women’s employment led men who placed lower value on social justice to report feeling less positive. However, men who placed higher value on social justice reported feeling more positive when the mandated increase in women’s employment was large. Study 2 further examined the role of values in responding to a vision involving diversity. It was hypothesized that when values guide behaviour, the underlying motivation is relatively autonomous. That is, instead of yielding to guilt or social pressure, the values-guided person acts to attain identity fulfillment. To investigate this matter, undergraduate students (N=475) were randomly assigned to watch either a visionary presentation about promoting workforce diversity or a business case presentation. The visionary presentation described a prejudice-free, inclusive workplace; the business case covered the legalities of diversity. It was found that participants whose values were diversity-oriented felt more “inspired” than other participants overall, and this effect was significantly stronger in the vision condition. The primary difference in findings between experimental conditions involved the association between a measure of autonomous motivation and participants’ reports of intended action. A positive, significant association was obtained in the vision condition; no significant association was obtained with the business case. These results are understandable from the conditional nature of autonomous motivation as assessed here. That is, in both conditions, some people (i.e., autonomously motivated people) said that if they acted to promote diversity, it would be in order to promote their personal values. However, it was only in the vision condition in which the connection of diversity-promotion action to personal values was made salient. Thus it appears that a vision can influence behaviour by inducing autonomously motivated people to recognize this connection. The vision was not more influential overall in motivating participants to support the proposed cause. Nonetheless results indicated that a vision can be a complementary tool in a diversity change implementation by sparking an interest to act within the right people. Taken together, the findings from these two studies indicate that a key way a vision motivates behaviour is by forging the link between values and a course of action.

Beatrice Moos (2010). Motivating change through vision: The influence of personal values, self interest, motivational orientation and affect on people’s responses to a visionary presentation about diversity. UWSpace. http://hdl.handle.net/10012/5682