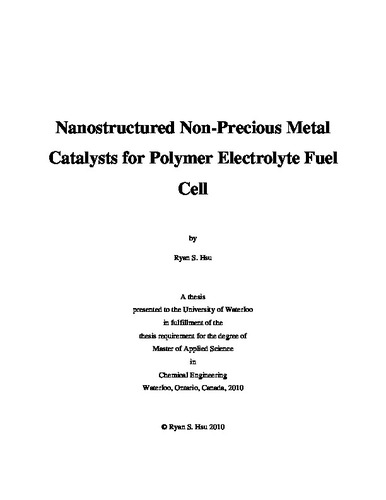 Polymer electrolyte membrane fuel cells (PEFCs) have long been thought of as a promising clean alternative energy electrochemical device. They are lightweight, highly efficient, modular and scalable devices. A fuel such as H2 or methanol that can be readily produced from a variety of sources can be utilized in PEFCs to generate electricity with low or no emissions. Despite these advantages, fuel cell technologies have failed to reach mass commercialization mainly due to short operational lifetimes and the high cost of materials. In particular, the polymer membrane and the catalyst layer have been problematic in reducing the material cost. Currently, platinum is the dominant material used to catalyze fuel cell reactions. However platinum is very expensive and scarce. In order to pursue the mass commercialization of fuel cells, two methods have been proposed: 1) increasing the utilization of platinum to lower the loading required, and 2) replacing platinum completely with a non-precious material. The latter has been suggested to be the long term solution due to the increasing cost of platinum. This thesis explores the elimination of platinum through the use of nanostructured non-precious metal catalysts for polymer electrolyte fuel cells. Several catalysts have been synthesized without the use of platinum that are active for the oxygen reduction reaction (ORR) which occurs at the cathode. Three different synthetic techniques were utilized using different nitrogen precursors. Aside from the different nitrogen precursors, each set of experiments utilize a different approach to optimize the oxygen reduction performance. Different characterization techniques are used to learn more about the ORR on non-precious metal fuel cells. The first experiment utilizes ethylenediamine, a well-known nitrogen precursor for non-precious metal fuel cell catalysts. Ethylenediamine is deposited onto two different porous carbon black substrates to determine the effectiveness of different porosities in creating active sites for the ORR. Of the two carbon black species, Ketjenblack EC-600JD and Ketjenblack ED-300J, the former was found to be more porous and effective. This result was mainly attributed to the increased surface area of the carbon black which allowed for better dispersion and a greater active site density. In this experiment, the coating of ethylenediamine on carbon black was also refluxed for 3 hours prior to the pyrolysis. It was found that refluxed catalyst samples showed much improved performance than catalyst samples without this procedural modification. The next experiment utilized cyanamide as a nitrogen precursor. Cyanamide was chosen due to its ability to form larger amounts of pyridinic nitrogen on the surface of the catalyst after a high temperature pyrolysis stage. The catalysts were heat-treated at 1000oC and the performance was measured. NH3 was introduced during the pyrolysis, which could remove the excess coating from the carbon surface, and increase the surface area of the catalyst by unblocking the carbon pores. A third modification to the procedure was carried out, where the heat-treated sample was ball-milled, re-coated, and heat-treated again in ammonia conditions to increase the nitrogen functionalities and increase the active site density. The performance was slightly increased from the original heat-treated sample. However due to the decreased surface area, the limiting current density also decreased. It was believed that ball-milling the sample crushed the pores within the catalyst sample, thereby lowering the active surface area and thus the current density. Therefore, the last sample was prepared similarly to the procedure for the third sample, but without ball-milling. This sample had restored surface area and improved ORR performance over all the synthesized catalyst samples – these experiments allowed for important realizations regarding the nature of the Fe-cyanamide-KJ600 catalysts and allowed for a drastic improvement in onset and half-wave potentials from the first catalyst. The final experiment discussed in this thesis describes the work done with 1,2,4,5-tetracyanobenzene and tetracyanoethylene as phthalcyanine precursors for non-precious metal catalysts (NPMCs). Iron(II) acetate was mixed with these phthalocyanine precursors to form polymer sheets of iron phthalocyanine or its monomeric units. By the creation of these polymer sheets of iron phthalocyanine, it allowed for a uniform distribution of iron centres on the surface of the carbon after a heat-treatment step. This allowed for high active site density through the design of these sheet polymers and prevented agglomeration or blockage of active sites which is thought to be a common problem in the synthesis of many NPMCs. Both tetracyanobenzene and tetracyanoethylene as precursors were tested. The tetracyanobenzene catalyst was heat-treated at different temperature ranging from 700-1100oC and characterized through electrochemical tests for the ORR. As an overall conclusion to this work, several catalyst samples were made and different approaches were successfully employed to improve the ORR performance. Of the synthesis treatments utilized to improve performance, each specific catalyst had different parameters to tweak in order to improve ORR performance. With X-ray photoelectron spectroscopy (XPS) analysis, conclusions were also specific to the catalysts structure and synthesis procedure, however quaternary and pyrrolic nitrogen groups seemed to play an influential role to the ORR final performance. Although relative amount of pyridinic nitrogen was not seen to increase with increasing catalyst performance during the studies; it may still play an essential role in the reduction of oxygen on the catalyst surface. The author of this work has not ruled out that possibility. Several recommendations for future work were suggested to broaden the knowledge and understanding of nanostructure non-precious metal catalysts to design a high performing, durable, and low-cost alternative to platinum based catalysts.