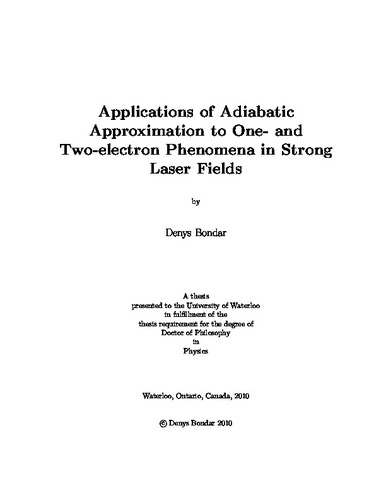 The adiabatic approximation is a natural approach for the description of phenomena induced by low frequency laser radiation because the ratio of the laser frequency to the characteristic frequency of an atom or a molecule is a small parameter. Since the main aim of this work is the study of ionization phenomena, the version of the adiabatic approximation that can account for the transition from a bound state to the continuum must be employed. Despite much work in this topic, a universally accepted adiabatic approach of bound-free transitions is lacking. Hence, based on Savichev's modified adiabatic approximation [Sov. Phys. JETP 73, 803 (1991)], we first of all derive the most convenient form of the adiabatic approximation for the problems at hand. Connections of the obtained result with the quasiclassical approximation and other previous investigations are discussed. Then, such an adiabatic approximation is applied to single-electron ionization and non-sequential double ionization of atoms in a strong low frequency laser field. The momentum distribution of photoelectrons induced by single-electron ionization is obtained analytically without any assumptions on the momentum of the electrons. Previous known results are derived as special cases of this general momentum distribution. The correlated momentum distribution of two-electrons due to non-sequential double ionization of atoms is calculated semi-analytically. We focus on the deeply quantum regime -- the below intensity threshold regime, where the energy of the active electron driven by the laser field is insufficient to collisionally ionize the parent ion, and the assistance of the laser field is required to create a doubly charged ion. A special attention is paid to the role of Coulomb interactions in the process. The signatures of electron-electron repulsion, electron-core attraction, and electron-laser interaction are identified. The results are compared with available experimental data. Two-electron correlated spectra of non-sequential double ionization below intensity threshold are known to exhibit back-to-back scattering of the electrons, viz., the anticorrelation of the electrons. Currently, the widely accepted interpretation of the anticorrelation is recollision-induced excitation of the ion plus subsequent field ionization of the second electron. We argue that there exists another mechanism, namely simultaneous electron emission, when the time of return of the rescattered electron is equal to the time of liberation of the bounded electron (the ion has no time for excitation), that can also explain the anticorrelation of the electrons in the deep below intensity threshold regime. Finally, we study single-electron molecular ionization. Based on the geometrical approach to tunnelling by P. D. Hislop and I. M. Sigal [Memoir. AMS 78, No. 399 (1989)], we introduce the concept of a leading tunnelling trajectory. It is then proven that leading tunnelling trajectories for single active electron models of molecular tunnelling ionization (i.e., theories where a molecular potential is modelled by a single-electron multi-centre potential) are linear in the case of short range interactions and ``almost'' linear in the case of long range interactions. The results are presented on both the formal and physically intuitive levels. Physical implications of the proven statements are discussed.