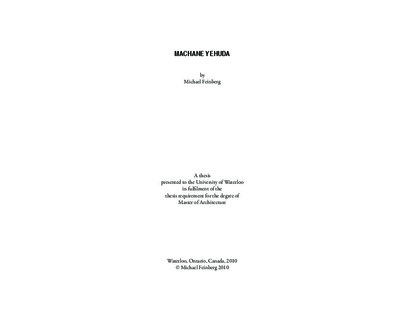 Modern Jerusalem has developed against a background of conflict between the European powers and the Ottoman Empire, between Jews and Arabs, and between religious and secular Jews. These conflicts have fragmented the urban fabric and have created a city of ethnically segregated enclaves. The thesis investigates this urban condition through detailed study of a particular institution, Jerusalem’s Machane Yehuda Market. Since its foundation at the end of the nineteenth century, the market has undergone numerous transformations as the city grew and the conflict evolved but, throughout, it has remained a rare place of cultural and economic exchange between otherwise separate communities. The cosmopolitan character of the market suggests a more hopeful alternative for the city and the region, but this character is threatened by changing circumstances. Persistent sectarian tensions continue to encourage increased segregation and, at Machane Yehuda, the problem is compounded by a severe lack of infrastructure, which restricts the market’s ability to operate in the face of increased economic competition and the redevelopment of the surrounding area. In response to these operational requirements, a new logistics terminal is proposed for Machane Yehuda. By ensuring the market’s economic viability, the terminal will sustain an institution that encourages coexistence in the centre of Jerusalem.