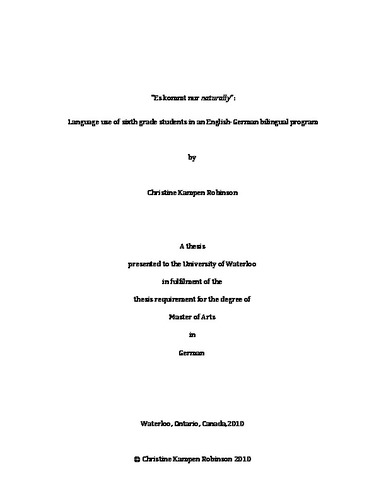 This thesis discusses language use by sixth grade students in the English-German bilingual program in Winnipeg, Manitoba. This bilingual program started out as a heritage language program in the early 1980s, and continues to be well attended. This project looked at the way in which students used both English and German with a fluently bilingual interviewer in an out-of-classroom setting. The study started with the following research questions: 1. How do children currently being educated in the English-German bilingual program in Winnipeg, Manitoba use German (the second language or L2) and English in out-of-classroom contexts? 2. What kind of borrowing tendencies do sixth grade students share? 3. What do these tendencies tell us about children’s bilingual language use and their communication strategies? It is often assumed that use of L1 when speaking L2 is a sign of laziness or a sign of low language proficiency. However, based on a thorough linguistic analysis of two interviews as case studies, it became clear that borrowing is used for far more diverse purposes than the simple filling of lexical gaps. After an examination that included cultural vs. core borrowing, structural transference, and discourse-related borrowing, the data suggests that depending on the proficiency of the speaker, borrowing is an extremely important communication tool that not only allows the speaker to become more proficient in their L2, but also a more highly developed bilingual.