An Assessment of the Interplay between the Shoulders and the Low Back in Occupational Tasks: A Manual Patient Handling Example 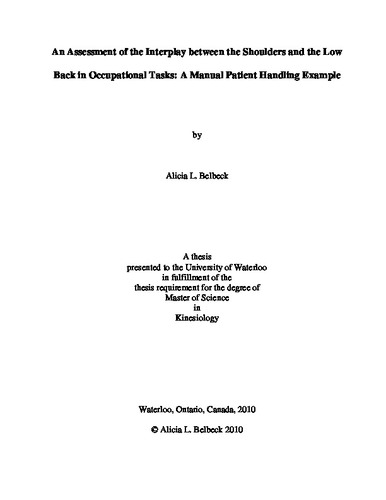 Redundancy and variation are characteristics of humans. Many muscles contribute to producing a movement at a joint, allowing different strategies for task performance. Further, the shoulders and back are involved in many tasks, including manual materials handling, but flexibility as to their relative roles in performing a task exists. In nursing, where manual patient handling (MPH) occurs daily, a risk of injury exists resulting from interactions with patients that may require awkward postures or sudden shifts in hand forces. Although some recommended MPH techniques have been advocated, many focus on lowering the risk of low back injury, without considering the effect of these techniques on other body regions. This study aimed to identify differences in shoulder and back physical exposures between performing self-selected and recommended patient handling techniques designed to reduce low back exposures. Twenty female participants performed three repetitions of five manual patient handling tasks using a self selected technique, followed by three repetitions of the same tasks using techniques learned in an interposed training session. Peak, mean and cumulative muscle activity, peak resultant moment, and ratings of perceived exertion were compared for each of the tasks before and after training, as well as identifying meaningful changes between the joints in mean population strength using a static strength prediction program. Significant decreases occurred at both the left and right shoulders and the low back for most measures, generally supporting the recommended techniques. Important exceptions existed, however, for the Sit-to-Chair tasks and Turn Toward tasks, where increases in several individual shoulder muscle activities, along with peak resultant moment, existed. Future recommendations for patient handling techniques should take into account potential negative exposures at the shoulders that may result from a back-centric injury avoidance paradigm.

Alicia Belbeck (2010). An Assessment of the Interplay between the Shoulders and the Low Back in Occupational Tasks: A Manual Patient Handling Example. UWSpace. http://hdl.handle.net/10012/5662