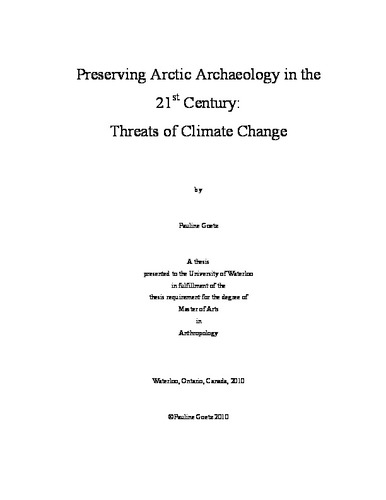 Archaeological sites around the world are facing many challenges. These challenges include urban expansion, resource exploitation, tourism, governmental infrastructure programs such as road development and one of the most recently recognized challenges is climate change. The archaeological record of the Arctic tundra is particularly sensitive to fluctuations in the climate, with its fragile ecosystems and ground underlain by permafrost. The impact of increasing global temperatures is a major public issue of the 21st Century, and the ramifications on archaeological sites are significant. The impacts felt over the next century are predicted to range from a sea level rise of almost a metre to a 6.4°C rise in temperature (IPCC, 2007:13). Arctic archaeological sites often invoke a feeling of being in stasis, simply waiting for the next researcher to come along and discover them anew. In fact, the continued existence of these sites is taken for granted, and many are in fact under siege from environmental factors. While the Arctic may face some of the greatest environmental challenges to its archaeological record, it also has some of the greatest potential of in situ preservation in the world. The slow growth of infrastructure in many parts of the Arctic along with a very low population density has meant that threats from development are not as significant or pressing as in other locales both in Canada and throughout the world. This means that the potential to preserve the archaeological record for future generations and future technologies is substantial if the surrounding environment can be stabilized. This paper summarizes the effects of a warming climate upon archaeological sites and uses the Arctic as a focal point, as it is the northern regions that are currently recognized as the most environmentally vulnerable. The Sannirut site on Bylot Island, Nunavut presents an excellent case study on the importance of preservation policies as well as the practicalities on how it can be done with current technologies.