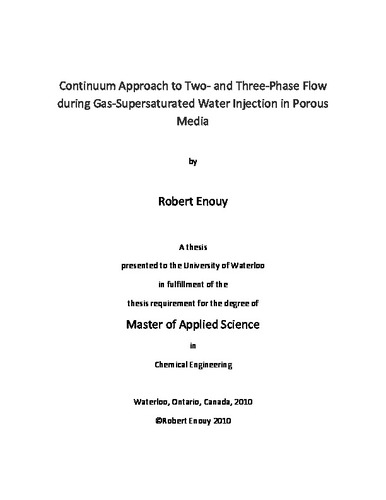 Degassing and in situ formation of a mobile gas phase takes place when an aqueous phase equilibrated with a gas at a pressure higher than the subsurface pressure is injected in water-saturated porous media. This process, which has been termed supersaturated water injection (SWI), is a novel and hitherto unexplored means of introducing a gas phase into the subsurface. Herein is a first macroscopic account of the SWI process on the basis of continuum scale simulations and column experiments with CO2 as the dissolved gas. A published empirical mass transfer correlation (Nambi and Powers, Water Resour Res, 2003) is found to adequately describe the non-equilibrium transfer of CO2 between the aqueous and gas phases. Remarkably, the dynamics of gas-water two-phase flow, observed in a series of SWI experiments in homogeneous columns packed with silica sand or glass beads, are accurately predicted by traditional two-phase flow theory which allows the corresponding gas phase relative permeability to be determined. A key consequence of the finding, that the displacement of the aqueous phase by gas is compact at the macroscopic scale, is consistent with pore scale simulations of repeated mobilization, fragmentation and coalescence of large gas clusters (i.e., large ganglion dynamics) driven entirely by mass transfer. The significance of this finding for the efficient delivery of a gas phase below the water table in relation to the alternative process of in-situ air sparging and the potential advantages of SWI are discussed. SWI has been shown to mobilize a previously immobile oil phase in the subsurface of 3-phase systems (oil, water and gas). A macroscopic account of the SWI process is given on the basis of continuum-scale simulations and column experiments using CO2 as the dissolved gas and kerosene as the trapped oil phase. Experimental observations show that the presence of oil ganglia in the subsurface alters gas phase mobility from 2-phase predictions. A corresponding 3-phase gas relative permeability function is determined, whereas a published 3-phase relative permeability correlation (Stone, Journal of Cana Petro Tech, 1973) is found to be inadequate for describing oil phase flow during SWI. A function to predict oil phase relative permeability is developed for use during SWI at high aqueous phase saturations with a disconnected oil phase and quasi-disconnected gas phase. Remarkably, the dynamics of gas-water-oil 3-phase flow, observed in a series of SWI experiments in homogeneous columns packed with silica sand or glass beads, are accurately predicted by traditional continuum-scale flow theory. The developed relative permeability function is compared to Stone’s Method and shown to approximate it in all regions while accurately describing oil flow during SWI. A published validation of Stone’s Method (Fayers and Matthews, Soc of Petro Eng Journal, 1984) is cited to validate this approximation of Stone’s Method.