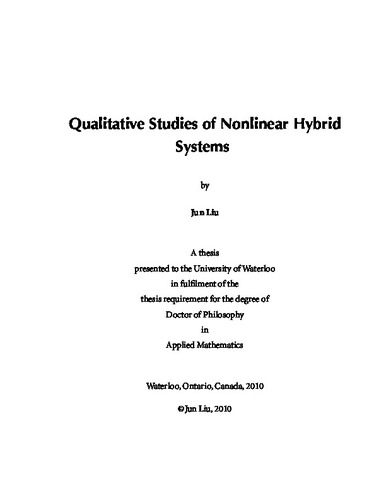 A hybrid system is a dynamical system that exhibits both continuous and discrete dynamic behavior. Hybrid systems arise in a wide variety of important applications in diverse areas, ranging from biology to computer science to air traffic dynamics. The interaction of continuous- and discrete-time dynamics in a hybrid system often leads to very rich dynamical behavior and phenomena that are not encountered in purely continuous- or discrete-time systems. Investigating the dynamical behavior of hybrid systems is of great theoretical and practical importance. The objectives of this thesis are to develop the qualitative theory of nonlinear hybrid systems with impulses, time-delay, switching modes, and stochastic disturbances, to develop algorithms and perform analysis for hybrid systems with an emphasis on stability and control, and to apply the theory and methods to real-world application problems. Switched nonlinear systems are formulated as a family of nonlinear differential equations, called subsystems, together with a switching signal that selects the continuous dynamics among the subsystems. Uniform stability is studied emphasizing the situation where both stable and unstable subsystems are present. Uniformity of stability refers to both the initial time and a family of switching signals. Stabilization of nonlinear systems via state-dependent switching signal is investigated. Based on assumptions on a convex linear combination of the nonlinear vector fields, a generalized minimal rule is proposed to generate stabilizing switching signals that are well-defined and do not exhibit chattering or Zeno behavior. Impulsive switched systems are hybrid systems exhibiting both impulse and switching effects, and are mathematically formulated as a switched nonlinear system coupled with a sequence of nonlinear difference equations that act on the switched system at discrete times. Impulsive switching signals integrate both impulsive and switching laws that specify when and how impulses and switching occur. Invariance principles can be used to investigate asymptotic stability in the absence of a strict Lyapunov function. An invariance principle is established for impulsive switched systems under weak dwell-time signals. Applications of this invariance principle provide several asymptotic stability criteria. Input-to-state stability notions are formulated in terms of two different measures, which not only unify various stability notions under the stability theory in two measures, but also bridge this theory with the existent input/output theories for nonlinear systems. Input-to-state stability results are obtained for impulsive switched systems under generalized dwell-time signals. Hybrid time-delay systems are hybrid systems with dependence on the past states of the systems. Switched delay systems and impulsive switched systems are special classes of hybrid time-delay systems. Both invariance property and input-to-state stability are extended to cover hybrid time-delay systems. Stochastic hybrid systems are hybrid systems subject to random disturbances, and are formulated using stochastic differential equations. Focused on stochastic hybrid systems with time-delay, a fundamental theory regarding existence and uniqueness of solutions is established. Stabilization schemes for stochastic delay systems using state-dependent switching and stabilizing impulses are proposed, both emphasizing the situation where all the subsystems are unstable. Concerning general stochastic hybrid systems with time-delay, the Razumikhin technique and multiple Lyapunov functions are combined to obtain several Razumikhin-type theorems on both moment and almost sure stability of stochastic hybrid systems with time-delay. Consensus problems in networked multi-agent systems and global convergence of artificial neural networks are related to qualitative studies of hybrid systems in the sense that dynamic switching, impulsive effects, communication time-delays, and random disturbances are ubiquitous in networked systems. Consensus protocols are proposed for reaching consensus among networked agents despite switching network topologies, communication time-delays, and measurement noises. Focused on neural networks with discontinuous neuron activation functions and mixed time-delays, sufficient conditions for existence and uniqueness of equilibrium and global convergence and stability are derived using both linear matrix inequalities and M-matrix type conditions. Numerical examples and simulations are presented throughout this thesis to illustrate the theoretical results.