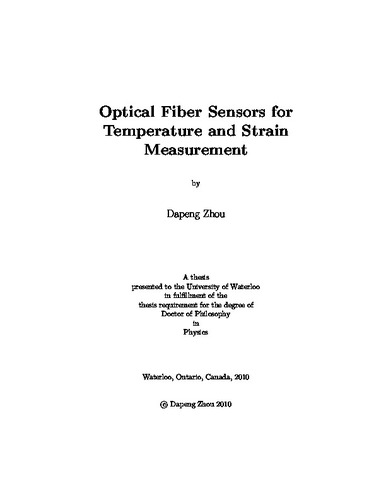 Optical fiber sensors have already been developed from the experimental stage to practical applications in the past 20 years. There is no doubt that this technology can bring a wealth of applications, ranging from sensors in medical industry, aerospace and wind-energy industries, through to distributed sensors in oil and gas industry. Among a large amount of physical and chemical parameters which optical fiber sensors could measure, temperature and strain are the most widely studied. This thesis presents several low-cost optical fiber sensor configurations primarily for temperature and strain measurement. Several basic optical fiber components which are good candidates as optical fiber sensors are used in our experiments, such as fiber Bragg gratings (FBGs), multimode fibers (MMFs), small-core dispersion compensation fibers (SCDCFs), high-birefringence fiber loop mirrors (HBFLMs), and polarization-maintaining photonic crystal fibers (PMPCFs). Temperature and strain cross sensitivity is a crucial issue when designing high performance optical fiber sensors, since most of the sensing components are both sensitive to temperature and strain. This would introduce an error when measuring each of them independently. We developed several schemes to overcome this problem by cascading an FBG and a section of MMF, inserting an FBG into an HBFLM, and space division multiplexing two HBFLMs. By measuring the wavelength shifts of the two independent components' spectra in each scheme, simultaneous measurement of temperature and strain could be achieved. However, all the above schemes need optical spectrum analyzers to monitor the spectral information, which increases the cost of the system and limits the operation speed. In order to avoid using optical spectrum analyzers, we use an intensity-based interrogation method with MMFs and HBFLMs as edge filters. By measuring power ratio changes, instead of monitoring spectra shifts, simultaneous measurement of temperature and strain could be realized with a low cost and high speed. The resolutions of the above five configurations are between 0.26 - 1.2 ^oC in temperature and 9.21 - 29.5 με in strain, which are sufficient for certain applications. We also investigate the sensing applications with the SCDCF. Since the cutoff wavelength of this kind of fiber is around 1663 nm, which makes it naturally an MMF in the wavelength range of 1550 nm. By slightly offsetting the core of the SCDCF with respect to that of the standard single-mode fiber (SMF), a high extinction ratio could be achieved with almost 9 dB. When a lateral force (lateral strain) applied on the SCDCF, extinction ratio will decrease. The change of the extinction ratio is almost independent of temperature variation. The measured extinction ratio change has a good quadratic relationship with respect to applied lateral force. This feature could be used to measure lateral force (lateral strain). In addition, we also use this feature to realize simultaneous measurement of both the longitudinal strain and lateral strain, since the applied longitudinal strain results in the whole spectrum shift. Moreover, a miniature high temperature sensor could also be made using the SCDCF. One end of a 4-mm long SCDCF is spliced directly to SMF with the other end cleaved. By monitoring the reflection spectrum of the SCDCF, temperature information could be obtained. This sensing head is very compact and could realize high temperature measurement up to 600 ^oC. Recently, a kind of PMPCF has been found to have very small responses to temperature change. This offers an opportunity to measure other parameters without considering temperature influence. We construct a compact 7-mm long transmission-type sensor with this kind of PMPCF. The interference spectrum generated by the coupling of cladding modes and core mode is obtained by slightly offsetting the PMPCF core to SMF core. The experiment shows that the interference spectrum is almost unchanged within the temperature range of 25-60 ^oC. The presented sensor has the potential to be used to measure strain and refractive index in the normal environment without temperature discrimination for practical applications.