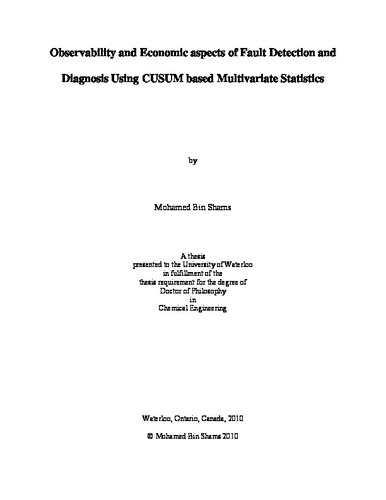 This project focuses on the fault observability problem and its impact on plant performance and profitability. The study has been conducted along two main directions. First, a technique has been developed to detect and diagnose faulty situations that could not be observed by previously reported methods. The technique is demonstrated through a subset of faults typically considered for the Tennessee Eastman Process (TEP); which have been found unobservable in all previous studies. The proposed strategy combines the cumulative sum (CUSUM) of the process measurements with Principal Component Analysis (PCA). The CUSUM is used to enhance faults under conditions of small fault/signal to noise ratio while the use of PCA facilitates the filtering of noise in the presence of highly correlated data. Multivariate indices, namely, T2 and Q statistics based on the cumulative sums of all available measurements were used for observing these faults. The ARLo.c was proposed as a statistical metric to quantify fault observability. Following the faults detection, the problem of fault isolation is treated. It is shown that for the particular faults considered in the TEP problem, the contribution plots are not able to properly isolate the faults under consideration. This motivates the use of the CUSUM based PCA technique previously used for detection, for unambiguously diagnose the faults. The diagnosis scheme is performed by constructing a family of CUSUM based PCA models corresponding to each fault and then testing whether the statistical thresholds related to a particular faulty model is exceeded or not, hence, indicating occurrence or absence of the corresponding fault. Although the CUSUM based techniques were found successful in detecting abnormal situations as well as isolating the faults, long time intervals were required for both detection and diagnosis. The potential economic impact of these resulting delays motivates the second main objective of this project. More specifically, a methodology to quantify the potential economical loss due to unobserved faults when standard statistical monitoring charts are used is developed. Since most of the chemical and petrochemical plants are operated under closed loop scheme, the interaction of the control is also explicitly considered. An optimization problem is formulated to search for the optimal tradeoff between fault observability and closed loop performance. This optimization problem is solved in the frequency domain by using approximate closed loop transfer function models and in the time domain using a simulation based approach. The optimization in the time domain is applied to the TEP to solve for the optimal tuning parameters of the controllers that minimize an economic cost of the process.