An exploration of the relationships between festival expenditures, motivations, and food involvement among food festival visitors 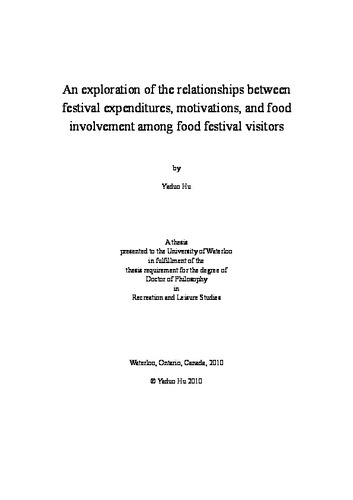 Food festivals and events are growing in popularity and warrant in-depth studies of festival visitors. Given the increasing socio-economic significance of this vibrant component of the world’s leisure industry, gaining knowledge of food festival visitors and their expenditure patterns is essential to festival researchers and destination marketers. This study examines the characteristics of food festival visitors and the determinants of their festival expenditures. Specifically, a conceptual model has been developed to delineate the correlations among festival spending patterns and the visitors’ event-related motivations, food-related motivations, and food involvement levels. Generally, the study was constructed around six hypotheses and five research questions, which were proposed based on a comprehensive review of literature related to events and festivals, culinary tourism, and food consumption. A questionnaire survey was designed to collect empirical data from festival attendees exiting the 9th China(Hefei) Crawfish Festival (CHCF) in Hefei city, Anhui province, China. Four aspects of food festival visitor characteristics were investigated: 1) festival expenditures in five categories (i.e., food and beverages consumed at the festival, food and beverages taken away, goods and gifts other than food and beverages, entertainment, and other expenses); 2) event-related motivations for attending, including eight individual motivators (i.e., relaxation, social, family, festival culture, excitement, escape, entertainment, and novelty); 3) food-related motivations for attending, including eight individual motivators (i.e., social, family, physical environment, food culture, celebration, sensory appeal, knowledge, and prestige); 4) food involvement traits, including four subsets (i.e., cooking, acquisition, eating, and preparing) and ten individual traits (i.e., food choice, food shopping, food processing, food presentation, cooking delight, cooking practice, taste judging, food preoccupation, and exotic food experiences). To gain a wider understanding of the food festival market, the study also investigated the visitors’ demographic and visit characteristics. A Tobit modeling procedure was applied to investigate the relationships between visitors’ festival expenditures (total and food-related) and their scores on festival motivations and food involvement scales. The results show that visitors’ total or food-related expenditures at the festival were not associated with their overall scores on event-related or food-related festival motivations, and visitors’ spending during the festival had negative correlations with their overall food involvement scale scores. However, a further investigation of sixteen individual motivators and ten food involvement traits revealed that within the event-related motivation category, “Novelty” and “Escape” were positively related to both the total and food-related expenditures, while “Social” and “Entertainment” were negatively related. Among the eight food-specific motivators, “Culture” and “Family” were negative correlates of both the total and the food/beverage spending and, respectively, “Sensory appeal” and “Social” were positive correlates of the total and food/beverage. In-depth investigations of the ten FIS items indicated that, in particular, the greater visitors’ interest in “Cooking practice” and “Exotic food experience”, the less they spent in total and on food/beverages. The only food involvement item that had a positive relation with the expenditures is “Cooking delight”. In terms of the relation between festival motivations and food involvement levels, the results of a series of t-tests reported that individuals who are more highly interested in food were more likely motivated to attend by food-related factors than individuals who are less interested in food, and those who reported less involvement with food showed equal interest in the food and event experiences available at the festival. With respect to visitor characteristics, empirical data gathered from the visitor survey provided a general description of the CHCF attendees’ age, gender, residence, and visit patterns. The findings illustrate that the visitors were typically young, and slightly more females than males attended the festival. The majority were local residents who came to the festival in a group with two or three family members or relatives/friends, and they tended to stay two to three hours at the festival. As could be expected with a food-themed festival, a great proportion of the visitors’ festival expenditures were related to food, especially, foods and beverages consumed at the festival. In terms of motivations for attending, generally, visitors were attracted to the festival by a synergy of food experiences available at the festival and the event itself. The most important motivations for attending were interpersonal, including both event-related and food-related “Social” and “Family” motivators. The event-related “Relaxation” and food-related “Physical environment” were also among the top three most important motivators in the two categories. With regard to food involvement, the visitors were relatively more highly involved with food than general food consumers; in particular, they were highly interested in “Cooking” and “Taste judging”. Overall, this study provides an in-depth examination of festival visitors and their consumption traits in a food festival context. When compared with those of the extant literature on culinary tourism and festival visitors, the results and discussion of the study confirm certain previous findings and, also, challenge some common assumptions. Based on the study’s key findings, the hypothesized conceptual model was extensively modified to illustrate the detailed correlations among a number of variables related to food festival visitors’ expenditures, event-related and food-related motivations for attending, and food involvement traits. Theoretical and practical implications of the study towards future research issues are subsequently drawn from the findings. It is suggested that the food festival market should be understood in a holistic sense within both the community festival and culinary tourism contexts, and future research endeavors should be directed towards a more comprehensive conceptual model that can thoroughly explain the food festival expenditure determinants.

Yaduo Hu (2010). An exploration of the relationships between festival expenditures, motivations, and food involvement among food festival visitors. UWSpace. http://hdl.handle.net/10012/5650