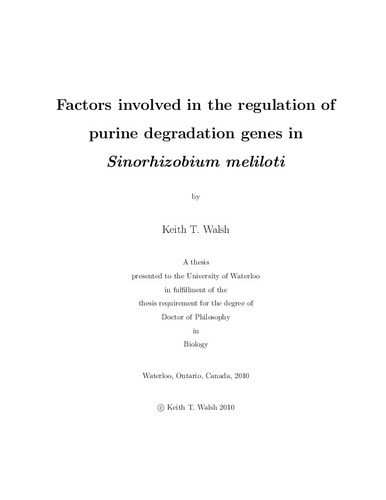 Genes involved in purine degradation in Sinorhizobium meliloti to date remain largely uncharacterized. Analysis of the bdhAxdhA2xdhB2 operon established a link between the degradation of purines and the carbon storage compound poly-3-hydroxybutyrate (PHB). This operon contains genes (xdhA2xdhB2) that encode xanthine oxidase / xanthine dehy- drogenase, an enzyme involved in the conversion of hypoxanthine and xanthine to uric acid. The bdhA gene located in the same operon encodes 3-hydroxybutyrate dehydrogenase, an enzyme responsible for catalyzing the second step in PHB degradation. This linkage be- tween the degradation of PHB (a carbon source) and purines (a nitrogen source) suggests a possible means by which Sinorhizobium meliloti obtains sufficient carbon and nitrogen to allow it to successfully colonize a host plant. Purine degradation genes in S. meliloti have also been studied by the phenotypic char- acterization of Tn5 mutants unable to utilize hypoxanthine. Mutations resulting in these phenotypes were found in three different genes, SMc03849 (ccmC), a cytochrome c bio- genesis mutant, SMb20684, a gene coding for a hypothetical protein possibly involved in the utilization of glyoxylate and SMb2192, a gene coding for a membrane spanning protein possibly involved in purine transport. In this study we further characterized these mutants by examining their ability to establish a symbiosis with Medicago sativa (alfalfa) and to fix atmospheric nitrogen. It was demonstrated that in the case of all the mutant strains there was a competitive deficiency in terms of gaining entry to root nodules relative to the wild-type strain. It was shown that this deficiency occurred even in strains capable of fixing atmospheric nitrogen suggesting that the inability to utilize hypoxanthine impairs the ability of S. meliloti to colonize the host plant. Of all of these genes studied thus far only one (SMb21292) is located in the region of the genome containing the greatest number of genes potentially involved in purine degra- dation. In this study we used transcriptional fusions to confirm the activation of genes in this genomic region when grown in media containing purines as carbon and nitrogen sources. These genes include xdhA1, SMb21284 and guaD1. Genes from the genome re- gion containing the mixed function operon including xdhA2 and guaD2 were also studied. In addition we were able to demonstrate the requirement of xdhC in producing a func- tional oxidase / xanthine dehydrogenase as well as the ability to grow on hypoxanthine or xanthine as a carbon and nitrogen source. This work was also able to demonstrate the critical nature of the LysR transcription regulator (SMb21291) in purine degradation in S. meliloti. Mutating this gene resulted in an inability to grow on hypoxanthine or xanthine as well as an alteration in levels of xanthine oxidase / xanthine dehydrogenase activity. By transducing the gene fusions into the LysR mutant background it was demonstrated that the protein coded for by SMb21291 acts to regulate or influence the expression of genes involved in the purine degradation cycle such as SMb21284 and xdhA1. In addition we were able to characterize strains with mutations in purine degradation genes in terms of their growth on different purines.