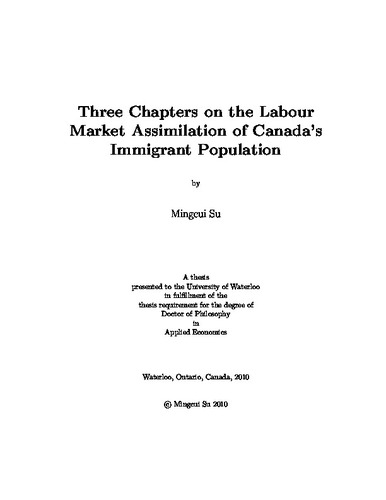 The three chapters of my dissertation examine immigrant assimilation in the Canadian labour market. Through three levels of analysis, which are distinguished by the sample restrictions that are employed, I investigate immigrant labour force and job dynamics, immigrant propensity for self-employment, and immigrant wage assimilation, respectively. In the first chapter, I exploit recently-introduced immigrant identifiers in the Canadian Labour Force Survey (LFS) and the longitudinal dimension of these data to compare the labor force and job dynamics of Canada's native-born and immigrant populations. I am particularly interested in the role of job, as opposed to worker, heterogeneity in driving immigrant wage disparities and in how the paths into and out of jobs of varying quality compares between immigrants and the native-born. The main finding is that the disparity in immigrant job quality, which does not appear to diminish with years since arrival, reflects a combination of relatively low transitions into high-wage jobs and high transitions out of these jobs. The former result appears about equally due to difficulties obtaining high-wage jobs directly out of unemployment and in using low-wage jobs as stepping-stones. I find little or no evidence, however, that immigrant jobseekers face barriers to low-wage jobs. We interpret these findings as emphasizing the empirical importance of the quintessential immigrant anecdote of a low-quality "survival job" becoming a "dead-end job". The second chapter analyzes immigrant choice of self-employment versus paid employment. Using the Canadian Census public use microdata files from 1981 to 2006, I update the Canadian literature on immigrant self-employment by examining changes in the likelihood of self-employment across arrival cohorts of immigrants and how self-employment rates evolve in the years following migration to Canada. This study finds that new immigrants, who arrived between 1996 and 2005, turned to self-employment at a faster rate than the earlier cohorts and that immigrants become increasingly likely to be self-employed as they spend more time in Canada. More important, I examine immigrant earnings outcomes relative to the native-born, instead of within, sectors and thus explore the extent to which a comparative advantage in self-employment, captured by the difference in potential earnings between the self- and paid-employment sectors, can explain the tremendous shift toward self-employment in the immigrant population. The results show that the earnings advantage between the self- and the paid-employment sectors accounts for the higher likelihood of self-employment for traditional immigrants in the years following migration. However, the potential earnings difference cannot explain the reason that non-traditional immigrants are more likely to be self-employed as they consistently lose an earnings advantage in the self-employment sector relative to the paid-employment sector. My paper suggests that immigrants may face barriers to accessing paid-employment, or immigrants are attracted to self-employment by non-monetary benefits. Lastly, in the third chapter, studies which estimate separate returns to foreign and host-country sources of human capital have burgeoned in the immigration literature in recent years. In estimating separate returns, analysts are typically forced to make strong assumptions about the timing and exogeneity of human capital investments. Using a particularly rich longitudinal Canadian data source, I consider to what extent the findings of the Canadian literature may be driven by biases arising from errors in measuring foreign and host-country sources of human capital and the endogeneity of post-migration schooling and work experience. The main finding is that the results of the current literature by and large do not appear to be driven by the assumptions needed to estimate separate returns using the standard data sources available.