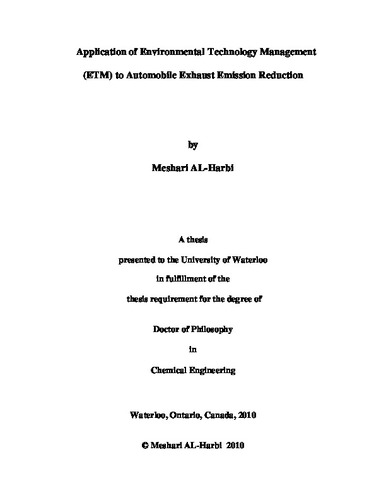 Vehicle emissions, arising from incomplete fuel combustion and reactions between N2 and O2 leading to NOX, have detrimental effects on human health and environment quality. Engine exhaust contains a variety of regulated components, such as hydrocarbons, CO, nitrogen oxides (NOX), and particulate matter (PM). Government environmental agencies have been continuously establishing regulations for automobile manufacturers to reduce these emissions. Lean-burn engines operate with an excess of oxygen, which makes the reduction of NOX, challenging, with a coincident challenge for diesel engines being PM. Diesel particulate filters have been successfully employed to reduce PM. NOX storage and reduction (NSR) catalysts and selective catalytic reduction (SCR) catalysts are two promising technologies used to mitigate NOX emissions. A diesel oxidation catalyst (DOC) is usually placed upstream of these to reduce hydrocarbons and CO emissions and oxidize NO to NO2, which leads to improved performance over these catalysts. In this study, the performance of DOCs and NSR catalysts, individually and in series, has been investigated as a function of temperature, gas composition, catalyst length, and catalyst configuration. The catalytic oxidation of CO, hydrocarbons, and NO, both individually and in mixtures with NO2, was investigated over a monolith-supported DOC. The data clearly show mutual inhibition effects between these species. Addition of each gas to the inlet gas mixture caused an increase in the light-off temperatures of the other species, mainly due to site adsorption competition. CO was less affected by other species because its light-off temperatures began prior to those of NOX and other hydrocarbons, and it is likely the primary surface species poisoning the active sites at low temperature. Hydrogen production via hydrocarbon steam reforming and water gas shift reactions was also investigated over a DOC during steady-state and cycling conditions (to mimic NSR catalyst operation) along the catalyst length. C3H6 and dodecane steam reforming started at 375 and 450°C, respectively, whereas the water gas shift reaction started at 225°C, and proceeded further than hydrocarbon steam reforming in terms of H2 production. It should be mentioned that H2 production via the hydrocarbon steam reforming and water gas shift reactions during cycling experiments, was higher than that observed during steady-state experiments. According to temperature programmed oxidation experiments performed after steam reforming, the better performance during cyclic operation is because less coke was deposited compared to that with steady-state experiments. Experiments were also performed over a NSR catalyst. The evaluations included testing the performance as a function of NOX source, NO or NO2, testing different regeneration protocols, and evaluating different reducing agents (hydrocarbons, H2, or CO). For NO and NO2 as the NOX source, the trapping and reduction performance was better when NO2 was used at all operating temperatures except 300ºC, likely due to high NO oxidation activity and rapid trapping of NO2 at 300ºC. Numerous reasons were provided to explain the improved performance with NO2 at other tested temperatures. The foremost reason though, is treating the monolith as an integral reactor. With NO2 as the NOX source, NO2 can be readily trapped at the very inlet and along the catalyst length, resulting in a higher trapping amount. Along the same concept, the released NOX from the inlet of the catalyst has more residence time and contact with downstream Pt sites, but more importantly more interaction between reductant and stored NOX. In the second set of experiments, different regeneration protocols were used. Different regeneration times, 4, 8 and 16 seconds with 4, 2, and 1% H2 as the reductant amounts, and constant lean times were evaluated. The data clearly show an improvement with longer regeneration times in both NOX trapping and overall reduction performance at all temperatures except 500°C, where the more significant NOX release resulted in an overall decrease in NOX conversion with increasing regeneration time. The improved performance at the lower temperatures is due to more extensive nitrate/nitrite decomposition with longer regeneration times, thus leading to more extensive surface cleaning. The performance of the NSR catalyst was also investigated using hydrocarbons, H2, or CO as reducing agents. H2 was found the best at T ≤ 250°C, where the decreased performance with CO and hydrocarbons was due to Pt site poisoning at 200°C and as a result of slow kinetics at 250°C. CO and hydrocarbons, however, proved to regenerate the catalyst as efficiently as H2 at T ≥ 300°C. Hydrogen production via steam reforming experiments can not explain the improved performance with hydrocarbons, since propylene steam reforming occurred at 375°C, with only a small amount of H2 generated, and dodecane or m-xylene reforming did not occur below 450°C. TPR data show that propylene started to activate as low as 217°C and the complete reduction of NO by propylene was achieved at 287°C. For surface chemisorbed NOX species, propylene was observed to reduce these species at T > 200°C, with high rates by 264°C, with this activity eventually leading to comparable performance with either CO or H2 at similar temperatures during NOX cycling experiments. The performance of two different hybrid DOC+NSR systems was also investigated. In the first configuration, a DOC and NSR catalyst were placed in series while in the other configuration, the DOC and NSR catalysts were divided into two equal volumes and placed in series (DOC + NSR + DOC + NSR). Overall, the data show an increase in the NOX performance with the split configuration at all temperatures tested, with small changes at 200°C due to poisoning effects of Pt and Ba sites by CO and hydrocarbons being significant. The improved performance with the split configuration was related to further NO oxidation occurring over the 2nd DOC, more H2 formed from steam reforming and WGS reactions, and reduced inhibition of the WGS reaction by hydrocarbons.