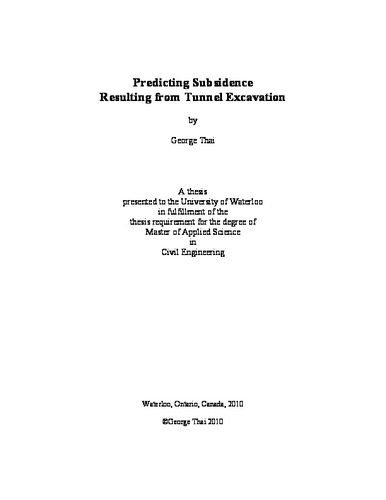 As a result of tunnel construction, the ground level surface above will tend to collapse downward as the soil seeks to refill the missing tubular cavity. Many infrastructures that were originally built on that surface may also fall slightly or severely depending on the engineering design and execution of the tunneling project. Engineers then must factor in the development of ground subsidence, examining geotechnical and geological issues to construct a model that would otherwise predict the extent of vertical settlements. Their predictions could help to assess potential damages and make corrective actions. In this thesis submission, analytical methods from the classical elasticity were used to estimate surface displacements for a prospective tunnel. The analytical equation tied in the method of virtual images originating from Sagaseta with the classical Kirsch elastic solutions for stress-displacements of an infinite plate with hole in order to establish a solution of half-space. This approach will be similar to what Verruijt-Booker had developed after Sagaseta but will include higher-order terms to simulate an excavation process in a longitudinal direction below ground and thereby obtain a new subsidence equation including ground parameters associated with tunnel shape changes occurring at its base, springline (sideway point) and crown (top). These parameters were not previously reported by the Verruijt-Booker work or from current technical literature. In addition, the prescribed solution could include any Poisson’ ratios in which only the original Verruijt-Booker could be found correct for only incompressibility conditions (υ = 0.5). The Verruijt-Booker equation considered deep tunnels only. An extra term influencing the subsidence was included in the modified solution which is significant for shallow tunnels. The derived equations were applied to calculate surface deflections using data from a tunnel construction project to test its viability. Comparison analysis was made with the three methods to be described- Peck, Sagaseta, and Verruijt-Booker. In addition, a parametric study was made to examine the amount of subsidence changed when deciding to construct a tunnel from a shallow to deeper zone. Finally, a qualitative study of the derived equation and Verruijt-Booker was conducted to assess potential subsidence behaviour between shallow and deep tunnels.