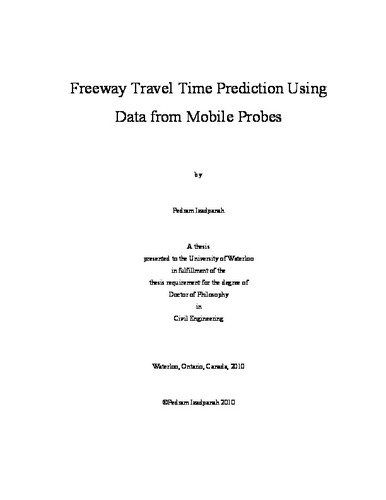 It is widely agreed that estimates of freeway segment travel times are more highly valued by motorists than other forms of traveller information. The provision of real-time estimates of travel times is becoming relatively common in many of the large urban centres in the US and overseas. Presently, most traveler information systems are operating based on estimated travel time rather than predicted travel time. However, traveler information systems are most beneficial when they are built upon predicted traffic information (e.g. predicted travel time). A number of researchers have proposed different models to predict travel time. One of these techniques is based on traffic flow theory and the concept of shockwaves. Most of the past efforts at identifying shockwaves have been focused on performing shockwave analysis based on fixed sensors such as loop detectors which are commonly used in many jurisdictions. However, latest advances in wireless communications have provided an opportunity to obtain vehicle trajectory data that potentially could be used to derive traffic conditions over a wide spatial area. This research proposes a new methodology to detect and analyze shockwaves based on vehicle trajectory data and will use this information to predict travel time for freeway sections. The main idea behind this methodology is that average speed on a section of roadway is constant unless a shockwave is created due to change in flow rate or density of traffic. In the proposed methodology first the road section is discretized into a number of smaller road segments and the average speed of each segment is calculated based on the available information obtained from probe vehicles during the current time interval. If a new shockwave is detected, the average speed of the road segment is adjusted to account for the change in the traffic conditions. In order to detect shockwaves, first, a two phase piecewise linear regression is used to find the points at which a vehicle has changed its speed. Then, the points that correspond to the intersection of shockwaves and trajectories of probe vehicles are identified using a data filtering procedure and a linear clustering algorithm is employed to group different shockwaves. Finally, a linear regression model is applied to find propagation speed and spatial and temporal extent of each shockwave. The performance of this methodology was tested using one simulated signalized intersection, trajectories obtained from video processing of a section of freeway in California, and trajectories obtained from two freeway sections in Ontario. The results of this thesis show that the proposed methodology is able to detect shockwaves and predict travel time even with a small sample of vehicles. These results show that traffic data acquisition systems which are based on anonymously tracking of vehicles are a viable substitution to the tradition traffic data collection systems especially in relatively rural areas.