Springfield's Sacred Canopy: Religion and Humour in The Simpsons 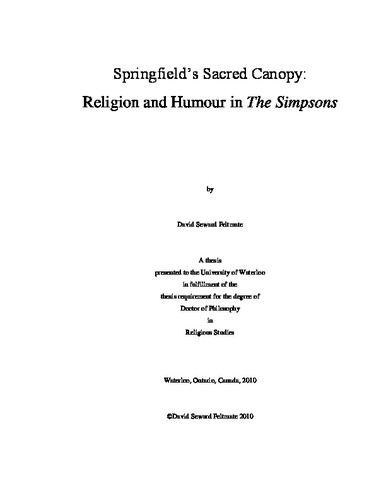 This dissertation examines religion’s satirical portrayal in The Simpsons. Building upon a sociological theory of humour developed from Peter Berger’s sociological theories of knowledge, religion, and humour, it assesses how The Simpsons criticizes America’s major religious traditions and their social roles. Arguing that the program presents a spectrum of acceptable religious practice, this dissertation demonstrates how The Simpsons constructs its arguments by selectively interpreting each tradition through its most recognizable characteristics and the common sentiments through which those characteristics are interpreted. These “ignorant familiarities” are used as a basis for understanding what Americans presumably know about religion, what is deemed acceptable “religious behaviour” in the public sphere, and what the consequences are for those religions that The Simpsons caricatures.