Characterization of Various Pyrene-Labelled Macromolecules in Solution by Fluorescence 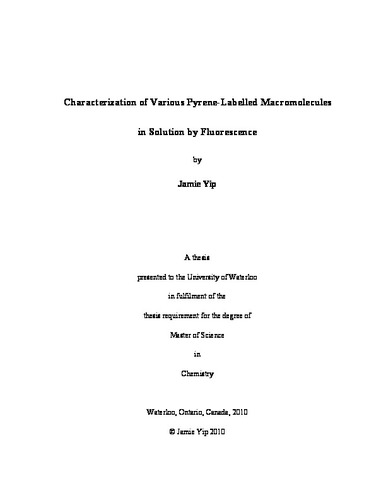 Time-resolved fluorescence was applied to linear and branched pyrene-labelled macromolecules to study their internal dynamics. The linear macromolecules consisted of two series of pyrene-labelled poly(N-isopropylacrylamide)s where the polymer was either end-labelled (Py2-PNIPAM-Y where Y represents the molecular weight of the polymer and equals 6, 8, 14, 25, and 45 kDa) or randomly labelled (Py-PNIPAM-X% where X represents the pyrene content and is equal to 0.1, 2, 3, 4, 5, and 6 mol%) with pyrene. Four dendrimer generations based on a bis(hydroxymethyl)propionic acid backbone represented the branched macromolecules where the terminal sites were labelled with pyrene (PyX-GY-COOH where X represents the number of pyrene units incorporated into the Y`th generation dendrimer). A polystyrene-dendrimer hybrid was also synthesized (PyX-GY-PS). The fluorescence decays of the Py2-PNIPAM-Y and Py-PNIPAM-X% samples were acquired in solvents of varying viscosity and were analyzed with the Birks Scheme and the Fluorescence Blob Model (FBM) to yield the excimer formation rate constants and , respectively. The two parameters showed the same trends with varying viscosity, implying that the same information concerning chain dynamics is obtained from the randomly and end-labelled PNIPAM samples. The fluorescence decays of the Py2-PNIPAM-Y samples were acquired in ethanol and in water to determine how pyrene solubility affects the behavior of the polymers in solution, as probed by time-resolved fluorescence. It was found that the decreased pyrene solubility in water led to large amounts of intra- and intermolecular pyrene aggregation. Finally, the pyrene-labelled dendrimers were studied in tetrahydrofuran (THF) to probe the mobility of the chain ends as a function of generation number. The average rate of excimer formation, , obtained from the Model-Free analysis of the fluorescence decays in THF, increased linearly with generation number. This finding, combined with molecular mechanics optimizations, led to the conclusion that excimer formation was greatly enhanced due to the branched nature of the dendrimer molecule. Together, these studies illustrate three different applications of the use of time-resolved fluorescence to characterize the internal dynamics of pyrene-labelled macromolecules.