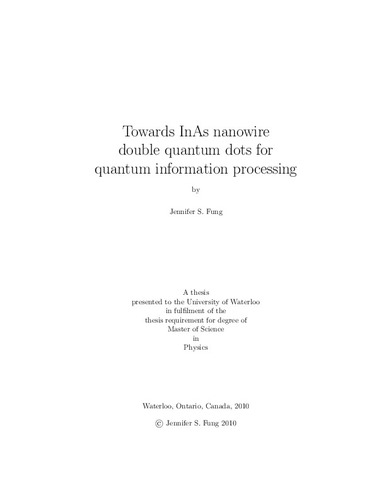 Currently, a major challenge for solid-state spin qubit systems is achieving one-qubit operations on a timescale shorter than the spin coherence time, T2*, a goal currently two orders of magnitude away. By taking advantage of the quasi-one-dimensional structure of a nanowire and the strong spin-orbit interaction of InAs, it is estimated that π-rotations can be implemented using electric dipole spin resonance on the order of 10 ns. To this end, a procedure for the fabrication of homogeneous InAs nanowire quantum dot devices is presented herein for future investigations of solid state spin qubits as a test bed for quantum computing. Both single and double quantum dot systems are formed using local gating of InAs nanowires. Single quantum dot systems were characterized through electron transport measurements in a dilution refrigerator; in one case, the charging energy was measured to be 5.0 meV and the orbital energy was measured to be 1.5-3.5 meV. The total capacitance of the single quantum dot system was determined to be approximately 30 aF. An estimate of the quantum dot geometry resulting from confinement suggests that the quantum dot is approximately 115 nm long. The coupling energy of the double quantum dot system was measured to be approximately 4.5 meV. The electron temperature achieved with our circuitry in the dilution refrigerator is estimated to be approximately 125 mK.