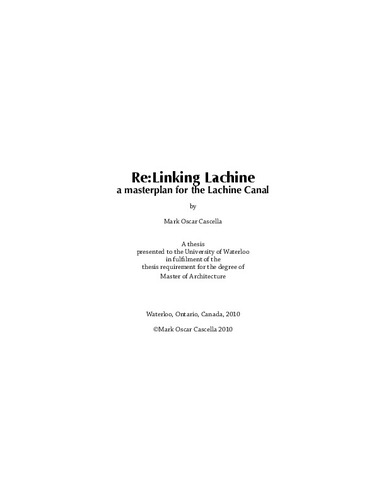 Since the undertaking of urban planning as a prescriptive discipline, landscape projects have demonstrated their ability to integrate valuable cultural spaces with the construction of complex infrastructural systems, including systems that manage urban waste outflows. By the twenty-first century, urban planners have been tasked with the reclamation of derelict post-industrial sites and their abandoned infrastructural networks. The reclamation of these sites typically deploys complex operations in order to salvage and recycle valuable materials. These operations are also tasked with the disposal, stabilization or treatment of hazardous waste, contaminated soils and waterborne pollutants. Urban practitioners and theorists increasingly recognize the suitability of landscape as an interdisciplinary medium to expedite the reurbanization of these sites, assembling expertise from multiple engineering disciplines, horticultural and zoological science, and architectural design. The thesis proposition is a masterplan for the post-industrial Lachine Canal in Montréal, Québec. The masterplan integrates government plans to rehabilitate aging highway infrastructure through the adjacent, now defunct Turcot Rail Yard. Using the analytical mappings defined by Alan Berger in Drosscsape and Pierre Belanger’s “infrastructural landscapes” as a point of departure, the masterplan outlines a strategy to coordinate emergent waste diversion industries along the canal. Proposed interventions include a hybridized infrastructural landscape upon the abandoned rail yard to manage municipal organic waste, the effluents of brownfield reclamation, and construction debris. The application of phytoremediation landfarming and constructed wetlands comprise new landscapes that facilitate decontamination of existing brownfields along the Canal, promoting their reintegration with the surrounding urban environment. The thesis illustrates a speculative evolution of the site as an adaptively managed landscape, valued for its diverse biological wildlife habitat and for its recreational use by the citizens of Montréal.