Tremor in Parkinson's Disease: Loading and Trends in Tremor Characteristics 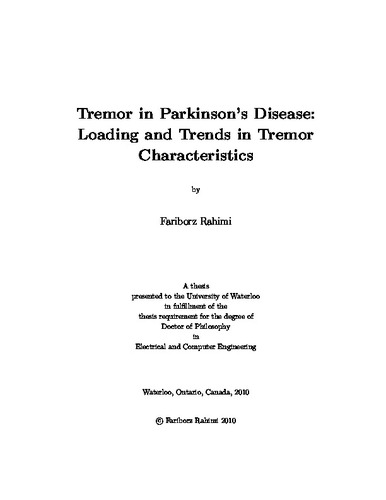 Parkinson's disease (PD) is a neuro-degenerative chronic disorder with cardinal signs of bradykinesia, resting tremor, rigidity, and postural abnormality/instability. Tremor, which is a manifestation of both normal and abnormal activities in the nervous system, can be described as an involuntary and periodic oscillation of any limb. Such an oscillation with a small amplitude, which is barely visible to the naked eye, is present in healthy people. This is called a physiological tremor and is asymptomatic. This tremor is believed to be the result of at least two distinct oscillations. A passive mechanical oscillation that is produced by the irregularities of motor unit firing, and by blood ejection during cardiac systole. The frequency and amplitude of these oscillations are dependent on the mechanical properties of the limb including joint stiffness and limb inertia. There is another component of oscillation that does not respond to elastic or inertial loading, which is called the central component, and is believed to arise from an unknown oscillating neuronal network within the central nervous system. Unlike physiological tremor, pathological tremors are symptomatic and can impair motor performance. Parkinson's disease (PD) tremor is generally manifested at rest, but also occurs during posture or motion. Classical PD rest tremor is known to be a central tremor of 4-6 Hz and peripheral origins have only a minimal role. However, whether or not the same central mechanism remains active during action tremor (including posture and movement) should yet be answered. Contrary to PD rest tremor, reported results on action tremor in the literature are diverse; and the reason for the changes in tremor characteristics in situations other than rest, or generally during muscle activation, is not fully understood. The lack of generality in the results of studies on action tremor, makes the efforts of treatment difficult, and is a barrier for mechanical/engineering approaches of suppressing this tremor. To investigate the role of mechanisms other than classic rest tremor, and possible sub-categories of tremulous PD in yielding diverse results, this study was conducted on twenty PD patients and fourteen healthy age-matched (on average) controls. To evaluate the possible contribution of (enhanced) physiological tremor, the study considered the effect of loading on postural hand tremor in a complete range of 0-100% MVC (Maximum Voluntary Contraction). The study looked at two measures of tremor amplitude and one measure of tremor frequency, and focused on two frequency bands of classic-rest (3.5-6.5 Hz) and physiological (7.5-16.5 Hz) tremors. The study revealed that PD tremor was not uniformly distributed in the three dimensional space, and then focused on the investigation of tremor in the dominant axis, which was the same as direction of loading. It also revealed that dopaminergic medication could significantly affect tremor components only in PD band, compared to the components in the physiological band. The study was an extension to previous studies and yielded similar results for the previously reported range of loading. However, with the extended range of loading, it revealed novel results particularly after separating PD patients into sub-groups. It was hypothesized that the coexistence of physiological mechanism, and considerable difference between sub-types of tremulous PD patients, are responsible for most of the diversity in the previously reported studies. This study showed that for clearer results the sub-groups are inevitable, and that automatic classification (clustering) provided the most separable sub-groups. These sub-groups had distinct trends of load effect on tremor amplitude and frequency. No matter which categorization method was used, at least one sub-group exhibited significantly higher tremor energy compared to the healthy participants not only in the PD band, but also in the physiological band. This meant that, for some sub-groups of PD, the physiological tremor is a very important mechanism and not the same as that of healthy people. The coexistence hypothesis was also affirmed by examining tremor spectrums' peak frequency and magnitude in the two separate bands. The necessity of the separation of tremulous PD patients into sub-groups, and the coexistence of physiological and classic PD tremor mechanisms for some of them are the factor that should be considered in the design of a suppressing device and also in the proposed treatment of action tremor in this population.