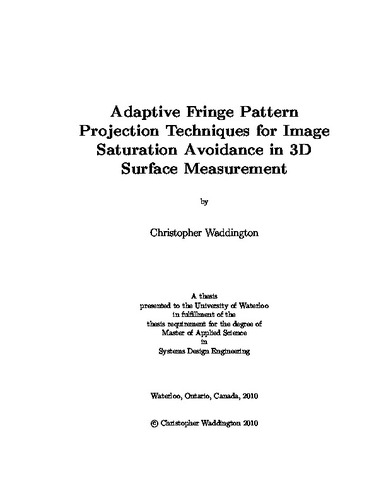 Fringe-pattern projection (FPP) techniques are commonly used for surface-shape measurement in a wide range of applications including object and scene modeling, part inspection, and reverse engineering. Periodic intensity fringe patterns with a specific amplitude are projected by the projector onto an object and a camera captures images of the fringe patterns, which appear distorted by the object surface from the perspective of the camera. The images are then used to compute the height or depth of the object at each pixel. One of the problems with FPP is that camera sensor saturation may occur if there is a large change in ambient lighting or a large range in surface reflectivity when measuring object surfaces. Camera sensor saturation occurs when the reflected intensity exceeds the maximum quantization level of the camera. A low SNR occurs when there is a low intensity modulation of the fringe pattern compared to the amount of noise in the image. Camera sensor saturation and low SNR can result in significant measurement error. Careful selection of the camera aperture or exposure time can reduce the error due to camera sensor saturation or low SNR. However, this is difficult to perform automatically, which may be necessary when measuring objects in uncontrolled environments where the lighting may change and objects have different surface reflectivity. This research presents three methods to avoid camera sensor saturation when measuring surfaces subject to changes in ambient lighting and objects with a large range in reflectivity. All these methods use the same novel approach of lowering the maximum input gray level (MIGL) to the projector for saturation avoidance. This approach avoids saturation by lowering the reflected intensity so that formerly saturated intensities can be captured by the camera. The first method of saturation avoidance seeks a trade-off between robustness to intensity saturation and low SNR. Measurements of a flat white plate at different MIGL resulted in a trade-off MIGL that yielded the highest accuracy for a single adjustment of MIGL that is uniform within and across the projected images. The second method used several sets of images, taken at constant steps of MIGL, and combined the images pixel-by-pixel into a single set of composite images, by selecting the highest unsaturated intensities at each pixel. White plate measurements using this method had comparable accuracy to the first method but required more images to form the composite image. Measurement of a checkerboard showed a higher accuracy than the first method since the second method maintains a higher SNR when the object has a large range of reflectivity. The last method also used composite images where the step size was determined dynamically, based on the estimated percentage of pixels that would become unsaturated at the next step. In measurements of a flat white plate and a checkerboard the dynamic step size was found to add flexibility to the measurement system compared to the constant steps using the second method. Using dynamic steps, the measurement system was able to measure objects with either a low or high range of reflectivity with high accuracy and without manually adjusting the step size. This permits fully automated measurement of unknown objects with variable reflectivity in unstructured environments with changing lighting conditions. The methods can be used for measurement in uncontrolled environments, for specular surfaces, and those with a large range of reflectivity or luminance. This would allow a wider range of measurement applications using FPP techniques.