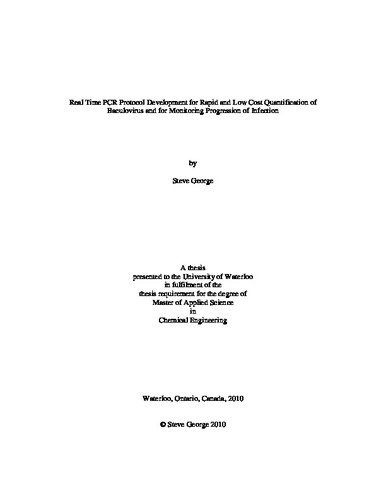 The work presented in this thesis aims to further the understanding and implementation of the Baculovirus Expression Vector System (BEVS) for varied uses such as protein production and viral vector production. To this end, three projects have been presented, two of which deal with methods to quantify baculovirus titres and the last deals with tracking baculovirus transcripts in infected insect cells. The first project examined assumption-free analysis as a method for data analysis of Real Time PCR data in order to enable direct comparison of baculovirus titres between samples, without the need for a traditional standard curve. It concluded that assumption-free analysis was well suited for this purpose and fold differences of baculovirus titres of different samples obtained using this method corresponded to real differences in sample titres. The second project aimed to develop a cheap and reliable method for sample preparation for Real Time PCR which would remove the need for the use of commercially available extraction kits. Samples were subjected to various combinations of Triton X-100 at different concentrations and different numbers of freeze/thaw cycles in order to determine the combination which would provide the best baculovirus genome exposure. One of these combinations was found to be at least as good as commercially available kits in reliably extracting baculovirus DNA and providing baculovirus titres that are at least as accurate. The third project was a preliminary study examining the effects of multiplicity of infection on the levels of baculovirus Gp-64 transcript in insect cell culture. The study concludes that at high multiplicities of infection, there seems to be no increase in baculovirus transcripts when the multiplicity of infection is further increased. This study served to allow for familiarization with tracking transcript levels, and the principles and techniques demonstrated here will form the basis for an exhaustive future study on the same subject.