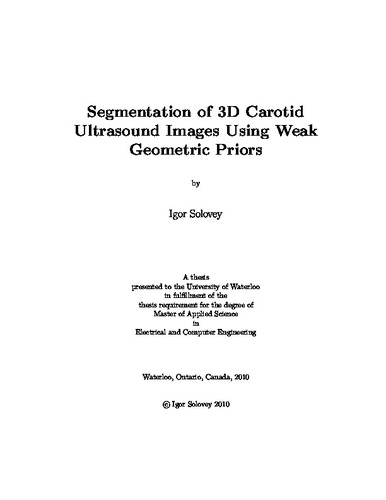 Vascular diseases are among the leading causes of death in Canada and around the globe. A major underlying cause of most such medical conditions is atherosclerosis, a gradual accumulation of plaque on the walls of blood vessels. Particularly vulnerable to atherosclerosis is the carotid artery, which carries blood to the brain. Dangerous narrowing of the carotid artery can lead to embolism, a dislodgement of plaque fragments which travel to the brain and are the cause of most strokes. If this pathology can be detected early, such a deadly scenario can be potentially prevented through treatment or surgery. This not only improves the patient's prognosis, but also dramatically lowers the overall cost of their treatment. Medical imaging is an indispensable tool for early detection of atherosclerosis, in particular since the exact location and shape of the plaque need to be known for accurate diagnosis. This can be achieved by locating the plaque inside the artery and measuring its volume or texture, a process which is greatly aided by image segmentation. In particular, the use of ultrasound imaging is desirable because it is a cost-effective and safe modality. However, ultrasonic images depict sound-reflecting properties of tissue, and thus suffer from a number of unique artifacts not present in other medical images, such as acoustic shadowing, speckle noise and discontinuous tissue boundaries. A robust ultrasound image segmentation technique must take these properties into account. Prior to segmentation, an important pre-processing step is the extraction of a series of features from the image via application of various transforms and non-linear filters. A number of such features are explored and evaluated, many of them resulting in piecewise smooth images. It is also proposed to decompose the ultrasound image into several statistically distinct components. These components can be then used as features directly, or other features can be obtained from them instead of the original image. The decomposition scheme is derived using Maximum-a-Posteriori estimation framework and is efficiently computable. Furthermore, this work presents and evaluates an algorithm for segmenting the carotid artery in 3D ultrasound images from other tissues. The algorithm incorporates information from different sources using an energy minimization framework. Using the ultrasound image itself, statistical differences between the region of interest and its background are exploited, and maximal overlap with strong image edges encouraged. In order to aid the convergence to anatomically accurate shapes, as well as to deal with the above-mentioned artifacts, prior knowledge is incorporated into the algorithm by using weak geometric priors. The performance of the algorithm is tested on a number of available 3D images, and encouraging results are obtained and discussed.