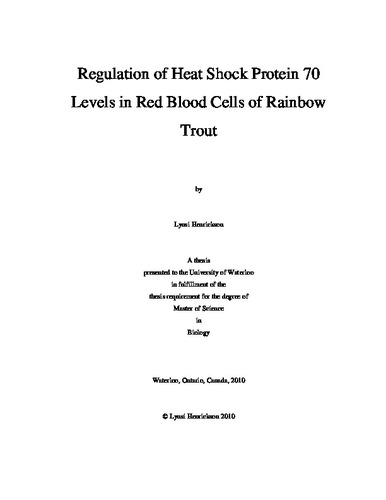 The physiological responses to stressor exposure can be broadly grouped into the organismal and the cellular stress responses. The organismal stress response involves the release of hormones into general circulation, while the cellular stress response involves the synthesis of proteins, the most important being the heat shock proteins (HSPs), which play a role in maintaining protein homeostasis. Elevated HSP70 expression in response to stressors has been demonstrated in trout (Oncorhynchus mykiss) red blood cells (RBCs). The ease of repeated sampling of blood suggests the possibility of using this tissue as a non-lethal marker of cellular stress in fish. This study tested the hypothesis that stressor exposure will elevate HSP70 expression in trout RBCs and the role of stress hormones in mediating this response. Acute heat shock exposure (+12oC) significantly elevated plasma cortisol, glucose and lactate levels in heat shocked fish over 24 h. A tissue-specific response was seen in HSP70 expression in liver, brain, gill and RBCs. To enable measurement of RBC HSP70 concentrations, an enzyme-linked immunosorbent assay (ELISA) was developed using a commercially available rabbit anti-salmon HSP70 and a recombinant chinook salmon (Oncorhynchus tshawytscha) HSP70. To determine effects of chronic exposure, two studies were conducted exposing trout to either cadmium (0, 0.75 or 2.0 µg/L over 28 d) or municipal wastewater effluent (0, 20 or 90% over 14 d). However, neither exposure elicited a significant HSP70 response. Effects of stress hormones on RBC HSP70 levels were tested by exposing cells in vitro to either cortisol (10 and 100 ng/mL) or epinephrine (10 nM) with or without heat shock. Heat shock elevated HSP70 content in trout RBCs but no modulation by stress hormones was seen. It was shown for the first time that RBCs release HSP70 content into the medium in response to an acute heat shock and this release is attenuated by stress hormones. Overall, HSP70 levels in RBCs have the potential to be a reliable non-lethal marker of acute cellular stress effects in fish. The release of HSP70 from RBCs leads to the hypothesis that HSP70 may also have an extracellular role in fish, and warrants further study.