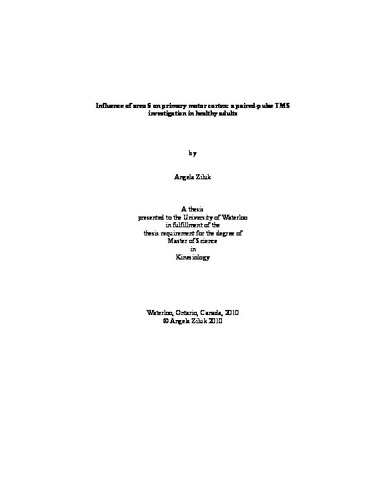 The neural correlates that underpin fine motor control of the hand and their connections with the primary motor cortex (M1) require further investigation. Brodmann’s area 5 located in the superior parietal lobule (SPL) is suggested to be an important cortical area involved in the processing of somatosensory input important for precision movements. Area 5 is present in monkey species capable of opposable thumb movements and it is proposed that this area evolved with the ability to execute manual behaviours such as pinch grip. Further, area 5 is dominated by the representation of the hand and forelimb, and has direct connectivity with M1 implicating its role in the control of hand movements. Few studies have investigated the function of area 5 in humans and none have examined the connectivity between area 5 and ipsilateral M1. This thesis presents a novel approach to study the influence of area 5 on M1 output in healthy and awake humans during the processing of somatosensory inputs and during performance of motor tasks involving the hand. Using paired pulse transcranial magnetic stimulation over left area 5 and ipsilateral M1, the connections between the two cortical loci was probed. It was hypothesized that area 5 would facilitate M1 output at short and long latencies during the processing of tactile inputs and during the performance of motor tasks compared to rest. The current results demonstrate that changes in M1 output are task and temporally specific. Facilitation of the motor evoked potential (MEP) was present at short latency of 6 ms during the processing of somatosensory input whereas inhibition was present during conditions where the hand was performing a task with the thumb and index finger. Further, an inhibitory effect was seen at 40 ms during cutaneous stimulation. In experiments 1 and 2, there was no net influence of area 5 on M1 output observed at rest. The findings presented may have revealed a novel path with which to alter the motor output, and possibly movement of hand muscles.