Recursive Estimation of Structure and Motion from Monocular Images 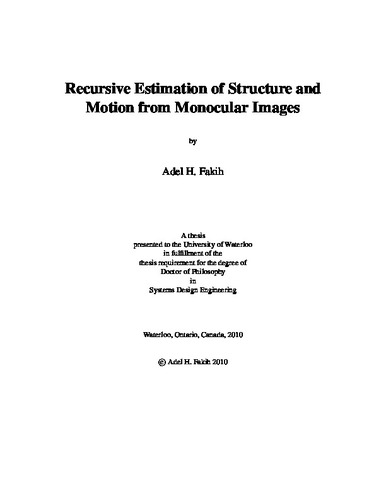 The determination of the 3D motion of a camera and the 3D structure of the scene in which the camera is moving, known as the Structure from Motion (SFM) problem, is a central problem in computer vision. Specifically, the recursive (online) estimation is of major interest for robotics applications such as navigation and mapping. Many problems still hinder the deployment of SFM in real-life applications namely, (1) the robustness to noise, outliers and ambiguous motions, (2) the numerical tractability with a large number of features and (3) the cases of rapidly varying camera velocities. Towards solving those problems, this research presents the following four contributions that can be used individually, together, or combined with other approaches. A motion-only filter is devised by capitalizing on algebraic threading constraints. This filter efficiently integrates information over multiple frames achieving a performance comparable to the best state of the art filters. However, unlike other filter based approaches, it is not affected by large baselines (displacement between camera centers). An approach is introduced to incorporate, with only a small computational overhead, a large number of frame-to-frame features (i.e., features that are matched only in pairs of consecutive frames) in any analytic filter. The computational overhead grows linearly with the number of added frame-to-frame features and the experimental results show an increased accuracy and consistency. A novel filtering approach scalable to accommodate a large number of features is proposed. This approach achieves both the scalability of the state of the art filter in scalability and the accuracy of the state of the art filter in accuracy. A solution to the problem of prediction over large baselines in monocular Bayesian filters is presented. This problem is due to the fact that a simple prediction, using constant velocity models for example, is not suitable for large baselines, and the projections of the 3D points that are in the state vector can not be used in the prediction due to the need of preserving the statistical independence of the prediction and update steps.