Development of a Neuromechanical Model for Investigating Sensorimotor Interactions During Locomotion 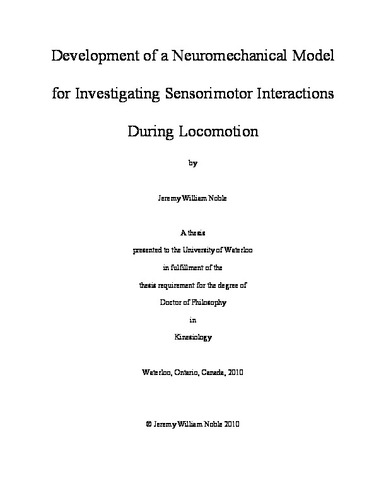 Recently it has been suggested that the use of neuromechanical simulations could be used to further our understanding of the neural control mechanisms involved in the control of animal locomotion. The models used to carry out these neuromechanical simulations typically consist of a representation of the neural control systems involved in walking and a representation of the mechanical locomotor apparatus. These separate models are then integrated to produce motion of the locomotor apparatus based on signals that are generated by the neural control models. Typically in past neuromechanical simulations of human walking the parameters of the neural control model have been specifically chosen to produce a walking pattern that resembles the normal human walking pattern as closely as possible. Relatively few of these studies have systematically tested the effect of manipulating the control parameters on the walking pattern that is produced by the locomotor apparatus. The goal of this thesis was to develop models of the locomotor control system and the human locomotor apparatus and systematically manipulate several parameters of the neural control system and determine what effects these parameters would have on the walking pattern of the mechanical model. Specifically neural control models were created of the Central Pattern Generator (CPG), feedback mechanisms from muscle spindles and contact sensors that detect when the foot was contact with the ground. Two models of the human locomotor apparatus were used to evaluate the outputs of the neural control systems; the first was a rod pendulum, which represented a swinging lower-limb, while the second was a 5-segment biped model, which included contact dynamics with the ground and a support system model to maintain balance. The first study of this thesis tested the ability of a CPG model to control the frequency and amplitude of the pendulum model of the lower-limb, with a strictly feedforward control mechanism. It was found that the frequency of the pendulum’s motion was directly linked (or entrained) to the frequency of the CPG’s output. It was also found that the amplitude of the pendulum’s motion was affected by the frequency of the CPG’s output, with the greatest amplitude of motion occurring when the frequency of the CPG matched the pendulum’s natural frequency. The effects of altering several other parameters of the pendulum model, such as the initial angle, the magnitude of the applied viscous damping or the moment arms of the muscles, were also analyzed. The second study again used the pendulum model, and added feedback to the neural control model, via output from simulated muscle spindles. The output from these spindle models was used to trigger a simulated stretch reflex. It was found that the addition of feedback led to sensory entrainment of the CPG output to the natural frequency of the pendulum. The effects of altering the muscle spindle’s sensitivity to length and velocity changes were also examined. The ability of this type of feedback system to respond to mechanical perturbations was also analyzed. The third and fourth studies used a biped model of the musculoskeletal system to assess the effects of altering the parameters of the neural control systems that were developed in the first two studies. In the third study, the neural control system consisted only of feedforward control from the CPG model. It was found that the walking speed of the biped model could be controlled by altering the frequency of the CPG’s output. It was also observed that variability of the walking pattern was decreased when there was a moderate level of inhibition between the CPGs of the left and right hip joints. The final study added feedback from muscle receptors and from contact sensors with the ground. It was found that the most important source of feedback was from the contact sensors to the extensor centres of the CPG. This feedback increased the level of extensor activity and produced significantly faster walking speeds when compared to other types of feedback. This thesis was successful in testing the effects of several control parameters of the neural control system on the movement of mechanical systems. Particularly important findings included the importance of connectivity between the CPGs of the left and right hip joints and positive feedback regarding the loading of the limb for establishing an appropriate forward walking speed. It is hoped that the models developed in this thesis can form the basis of future neuromechanical models and that the simulations carried out in this thesis help provide a better understanding of the interactions between neural and mechanical systems during the control of locomotion.