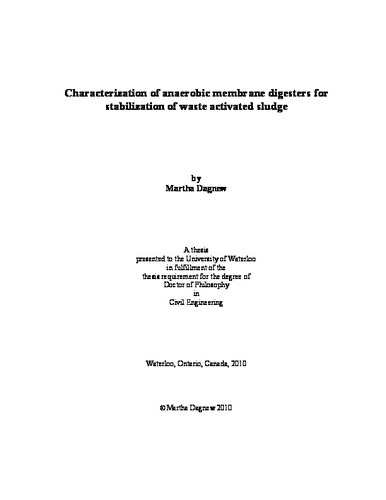 Anaerobic membrane bioreactors may provide a sustainable technological solution for digestion of waste activated sludge due to their capacity to achieve substantial volatile solids (VS) destruction and positive energy balances with reduced digester volumes. However, membrane integrated anaerobic systems may have limitations that are imposed by membrane fouling and a decrease in biomass activity due to possible exposure of biomass to high shear conditions. This study characterised bioprocess and membrane performance under varying conditions, identified foulant type and origin and mechanism of fouling, and developed fouling control strategies by using low cross flow velocity and pressure anaerobic membrane systems. The study employed a pilot scale anaerobic digester integrated with negative and neutral tubular membranes; pilot and bench scale control digesters supported with bench scale filtration unit parametric studies. The membranes were polyvinylidene difluoride based with an average pore size of 0.02 micron and were operated at a constant cross flow velocity of 1 ms-1 and constant trans-membrane pressure of 30 kPa. Four operating conditions consisting of different combinations of HRT and SRT were evaluated. By integrating membranes into the digesters it was possible to simultaneously enhance digestion and increase throughput of the digesters without affecting its performance. The anaerobic membrane digester showed 48-49% volatile solids destruction at 30 days SRT under conventional and higher loadings of 1.2±0.4 and 2.1±0.6 kg COD m-3day-1. This was a 100% increase in performance compared to a control digester subjected to higher loading. This result was supported by the associated specific methane generation. The control digesters operated at a relatively higher SRT showed comparable VS destruction and gas generation to the anaerobic membrane running at a similar SRT. However the extra gas generated didn’t compensate heat required to maintain larger volume of the digester. In case of anaerobic membrane digesters due to the high rate feeding, increase biogas production and co-thickening, the energy balance increased by 144 and 200% under conventional and higher loading conditions respectively. Characterization of membrane performance showed that the average sustainable flux was 23.2±0.4 and 14.8±0.4 LMH during HRT-SRTs of 15-30 and 7-15 days respectively. The critical fluxes were in the range of 30-40, 16-17 and 20-22 LM-2H-1 during HRT-SRTs of 15-30, 7-30 and 7-15 days respectively. The decline in membrane performance at a higher loading was associated with the formation of cake layers on the membrane surface that led to reversible fouling. The additional decline in performance at extended SRT was attributed to irreversible fouling. The colloidal fraction of the sludge showed an overall higher fouling propensity during the long term pilot studies and short term filtration tests. The suspended solids fraction of the sludge showed a positive impact at concentration below 15 g/L but resulted in a decrease of membrane performance at higher concentrations. Further studies of foulant origin through a series of microscopic, membrane cleaning and sludge characterization studies showed that the colloidal proteins, soluble carbohydrates and inorganic materials such as iron, calcium and sulfur and their interaction to have a significant impact on membrane fouling. To control anaerobic membrane fouling by the digested sludge, integration of membrane relaxation techniques in the filtration cycle were found effective. By incorporating a unique relaxation technique to tubular membranes, it was possible to increase the sustainable flux to 29.2±1.8 and 34.5±2.5 LM-2H-1 for neutral and negative membranes during 15-30 HRT-SRT process condition. Addition of cationic polymers and sequential mechanical-citric acid membrane cleaning, that targeted both reversible and irreversible fouling was also found effective.