Carving Away: An Inquiry into the Act of Making 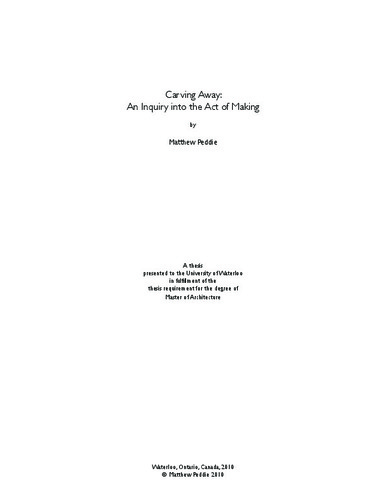 The act of creating anything, from a novel to a simple meal to a building, requires the combination of many elements. Broadly speaking, these elements are technique, technology, and materiality, the three of which are bought into combination according to the intent of the maker. The effects of the combination of these elements can be very powerful. One need only call to mind the cool, damp weightiness of stepping inside a church whose walls are made of solid stone or to contrast this experience with that of picking up a lightweight rowing shell whose thin wood frame and taut fabric skin combine amazing strength with impossible slenderness. These experiences amaze and move us because the various elements that brought them into being are combined in a harmonious way and one that is aligned with a poetic ambition. This is not to say that all three elements need to be mixed in equal proportions or that there is a hierarchy of importance; it is the mixing that is essential, not the presence of any one element. A specific focus of this thesis is technology and the way that architects use it and are shaped by its use. Many architects have rushed to embrace recent advances in digital design and fabrication tools, forgetting that that the act of making requires the convergence of a number of forces. Focussing too much attention on one will often come at that detriment of another. Through a series of projects, this thesis explores a number of methods of designing and making. The projects undertaken range from a series of hand carved spoons, to sculptural, physical translations of flowing water, through to the full-scale realization of a suspended ceiling for the North House prototype. An effort has been made to work across a variety of scales, and to employ as wide a range of techniques and technologies as possible. These projects have afforded a kind of research through making, one that engages the entire body rather than merely the mind, and which has been supplemented with more traditional means of research. In addition to the role of technology in architectural practice, attention has been paid to the relationship between ways of making and time, and to the way in which certain artists, designers, and architects are able to slow, compress, or even transcend time. A series of brief case studies serves to illustrate how this is possible while also describing a set of values against which the work of this thesis can be calibrated. By its very nature this thesis takes the form of an ongoing project, one in search of a somewhat elusive goal. The path that a powerful and moving project must take is often full of uncertainty. If I am certain of anything however, it is that achieving the proper mixture of elements requires patience, persistence, and a willingness to let a project take on a life of its own.