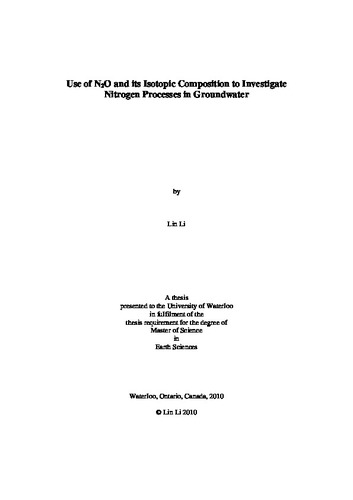 This study explores the use of N2O and its isotopic composition to investigate nitrogen processes in groundwater aquifers. Groundwater sampling was undertaken in 2008-2009 at two septic system sites (Long Point site and Lake Joseph site) and two agricultural sites (Strathroy site and Woodstock site). All of these four sites have been studied previously, and denitrification zones were identified by using NO3- isotopes. Extremely broad ranges of N2O-N concentrations are present at septic system sites (1 to 1071 μg/L at Long Point and 0.1 to 106 μg/L at Lake Joseph). N2O concentrations at the agricultural sites show lower levels and narrower ranges (0.1 to 3.3 μg/L at Strathroy and 14.6 to 40.5 μg/L at Woodstock site). However, N2O-N concentrations at four sites except Strathroy are higher than the atmospheric equilibrium values (0.27 to 0.37 μg/L at 8 to 17°C) as well as N2O-N values in surface water (0.2 to 1.2 μg/L, Grand River). This provides indication of N2O production in subsurface in both septic system sites and agricultural sites. Using reported enrichment factors and measured ranges for NH4+ and NO3- isotopic values, ranges were calculated for the isotopic composition expected for N2O produced by nitrification and denitrification. At Long Point site, δ15N-N2O and δ18O-N2O ranging from -43.9 to +24.9 ‰ and +20.6 to +89.4 ‰ indicates that nitrification is mainly responsible for N2O accumulation in both proximal shallow and deep zones while some N2O at the bottom of the aquifer is presumably produced from denitrification. After N2O is produced in the plume core, δ15N and δ18O in N2O reveal that N2O is further consumed to N2. Also, N2O isotopic values cleanly show seasonal N2O production shifted from mostly nitrification in early season to primarily denitrification in late season. At Lake Joseph, δ15N-N2O and δ18O-N2O varying from -4.4 to -43.2 ‰ and +24.7 to +56.7 ‰ reveal that nitrification N2O was mainly present in aerobic zone whereas denitrification zone was found in downgradient anaerobic area. At Strathroy site, δ15N-N2O (+1.7 to -29.7 ‰) and δ18O-N2O (+33 to +65 ‰) show that N2O in shallow aquifer (< 5m depth) is presumably derived from atmosphere and nitrification whereas in deep aquifer (>5m depth), N2O formation occurs during denitrification. At Woodstock site, δ15N-N2O (-4.7 to -15.9 ‰) and δ18O-N2O (+30.7 to +37.1 ‰) at Woodstock provide indication of N2O production from a mixing of denitrification N2O and tropospheric N2O. N2O isotopic signatures are highly useful to identify N2O sources which include nitrification, denitrification, and dissolution of atmospheric N2O at both septic system sites and agricultural sites. Further, at Lake Joseph site and Woodstock site, denitrification evidence from NO3- concentration/isotopes is lacking but N2O isotopes suggest the occurrence of denitrification. At Long Point site, N2O isotopes indicated N2O production was by denitrification occurred early in the season; however, no NO3- isotopic enrichment was t that depth until in late season. These sites provide evidence that N2O is an early and sensitive indicator of denitrification in groundwater at both septic system and agricultural sites. Additionally, N2O isotopes are valuable for detecting N2O consumption whereas NO3- isotopes cannot provide insight into this process.

Lin Li (2010). Use of N2O and its Isotopic Composition to Investigate Nitrogen Processes in Groundwater. UWSpace. http://hdl.handle.net/10012/5587