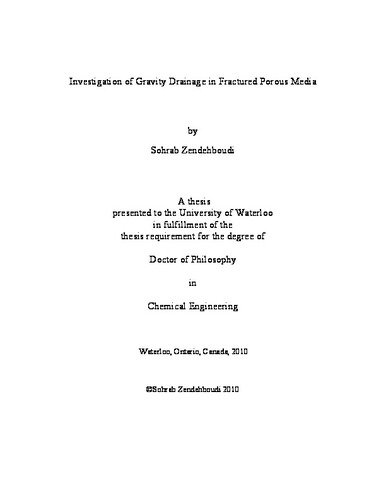 The oil production from well fractured carbonate reservoirs is a considerable part of the total oil production in the world. The petroleum resource base in naturally fractured reservoirs is estimated to be in the range of billions of barrels in the U.S and in addition, a multibillion- barrel international oil resource base exists in naturally fractured reservoirs. Gravity drainage is important in some of oil recovery processes, either acting as the driving force in processes using horizontal wells or altering the displacement patterns during water-flooding, chemical flooding, CO2 flooding and other EOR methods. The gravity drainage process has a major effect on oil recovery from oil reservoirs. Gravity drainage driven oil production in naturally fractured and other complex reservoirs falls into two regimes: the balk flow regime and the film flow regime. Oil recovery by gravity drainage in a fractured reservoir strongly depends on the capillary height of the porous medium. Capillarity and gravity forces are usually the major driving forces in fractured reservoirs. This PhD thesis consists of two main parts namely: 1) Experimental works on gravity drainage, and 2) Modeling and simulation of the gravity drainage processes using COMSOL® software. An appropriate design of experiment (DOE) method was selected to find the most important parameters contributing in gravity drainage and then conduct the experiments in a useful as well as economic manner. A two-dimensional experimental setup was employed to investigate free fall gravity drainage (FFGD) and controlled gravity drainage (CGD) using unconsolidated glass beads fractured porous media having various fractures configurations. Flow visualization measurements were carried out. Following the flow visualization experiments, parametric sensitivity analysis was performed considering the effects of different system parameters such as fracture aperture, matrix height, permeability, and fluid properties on the dependent variables including drainage rate, critical pumping rate, maximum drainage rate, recovery factor and so on. These experiments enabled us to capture some aspects of the recovery mechanism and the flow communication between matrix block and fracture during gravity drainage. After analyzing the experimental data for the FFGD test runs, it was found that the rate of liquid flowing from matrix to fracture is proportional to the difference of liquid levels in the matrix and in the fracture. In addition, the characteristic rate and the maximum liquid drainage rate from the fractured models were determined for such a stable gravity-dominated process. The experiments showed that the presence of fracture is more influential in lower matrix permeability systems. For a given fracture-matrix system with different initial liquid saturation conditions, it was seen that the production history can be correlated by plotting the fraction of recoverable liquid as a function of time. Furthermore, the recovery factor can be correlated using dimensionless numbers such as the Bond number and the dimensionless time. For the controlled gravity drainage (CGD) test runs conducted, the experimental results indicated that higher pumping rates cause a higher difference between the liquid levels in the fracture and in the matrix, thus the gas breakthrough happens sooner. Moreover, it was found that as long as the porous medium is drained with a constant liquid pumping rate but lower than critical rate, the height difference between the G-L interfaces in matrix and fracture remains constant. In this study, a new concept of “Critical Pumping Rate” (CPR) was defined at which each particular porous medium has recovery factor equal to the recovery factor for higher rates just before gas breakthrough. The difference between liquid levels in fracture and matrix remains unchanged at rates higher than CPR. Known this particular withdrawal rate, there are two main advantages, namely: 1) choosing a pumping rate lower than it to drain the reservoir without getting gas breakthrough; and 2) understanding the physics of pumping behaviour from fractured media and extending the concept to the real cases. In addition, the maximum liquid pumping rate from each physical model was studied and it was found that the rate depends strongly on the storage capacity of the fractures, petrophysical properties of each model as well as physical properties of test fluids. The critical rate, maximum rate, recovery factor at gas breakthrough and difference of gas liquid interface positions in matrix and fracture were correlated by dimensionless numbers such as Bond number, Capillary, and the ratio of permeabilities. Linear regression correlations presented in this study can predict production history and flow behaviour in the fractured porous media for a wide range of dimensionless numbers. The COMSOL® software was used to numerically simulate the gravity drainage processes in the two-dimensional flow experiments for fractured porous media. The parameters of the model were based on theory, as well as on the results of the two-dimensional gravity drainage experiments. The simulation results for the gravity drainage processes compared favourably with the experimental results, as a good match between the numerical solution and the experimental data was found. The simulation model developed provides a basis for further modeling of gravity drainage process in more complicated porous media.